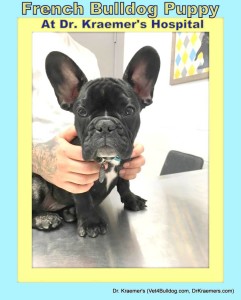 French bulldogs are English in origin, the French bulldog was an invention of 19th century English lace makers who specially bred a ‘lap’ version of the bulldog, which they nicknamed the “toy” bulldog. The craftsmen fled to France during the industrial revolution, taking their pets with them and the popular French bulldog was born.

French Bulldog puppies are more like their English bulldog than the  American bulldog.  French bulldogs are stocky, with small legs set close to the ground, they feature a round, barrel-shaped body and a deep and square lower jaw. Signature to bulldogs, they also have a mass of wrinkles around their head and shoulder area.

However, unlike English or American bulldogs, French bulldogs are distinguished by their large, prominent round eyes and their pointy, bat-like ears, which stand straight up.

The French Bulldog is medium-sized bulldogs, who weigh an average of 19 to 28 pounds and stand about 12 inches high. The French bulldog puppy is a bright dog with a pleasant and easygoing nature. French bulldogs love to give affection and be loved in return. They thrive on family life, are great with children and generally get along with other pets. French bulldogs are intelligent, fairly active dogs and enjoy stimulating exercise, especially young French bulldog puppies, who can be very frisky and enjoy chasing balls and other active games.

On Average Frenchie’s lifespan is around 11-13 years. 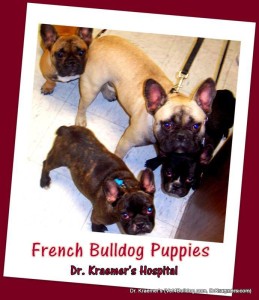 Dr. Kraemer’s French Bulldog and French Bulldog Puppy Tip 3: Before buying a new French Bulldog Puppy, you might consider checking your local rescue. The cost of a rescue puppy is much lower and you will have the added bonus of saving a bulldog that is in desperate need of a loving family and a new home. For more information on how to adopt a rescued bulldog and how to support and Empower Rescue, click here.

Dr. Kraemer’s French Bulldog and French Bulldog Puppy Tip 4: Before and after buying or adopting a French Bulldog Puppy or other brachycephalic breed pets like the English, Old English or American bulldog, read my Zen & Bulldog Maintenance “bulldog 101” chapter. This chapter is the cornerstone of my website, written to be easy to understand and complemented with photos and videos.

You will learn how to become a “Bulldog Certified Yoda Master”, keeping your bulldog puppy healthy and at minimal cost!