Your bulldog flat headed condensed facial structure has an undesirable effect on the anatomy of the neck and head and its relation to the respective soft tissues and other structures.

Bulldog BAS refers to a set of primary and secondary upper airway anatomical abnormalities. The primary and secondary abnormalities are caused by the narrowing of your bulldog’s upper airways, compression, increased airway resistance and increased negative intra-airway pressure (i.e suction, you can think of your bulldog oral cavity, nose, and larynx as a straw that endures constant suction, you can see how over time it will collapse in). When and if this negative intra-airway pressure exceeds the resistance of the surrounding tissue, inflammation, swell and edema of the laryngeal tissue will occur, which will further narrow the airways and further increase the effort required to inhale.

Your bulldog may be affected by a combination of one or more of these abnormalities.

STRIDOR:  One of the most common clinical signs of brachycephalic airway syndrome in bulldogs and French bulldogs is a harsh “mechanical”  high-pitched vibrating respiration resulting from the turbulent airflow in the larynx that is worsened by exercise or excitement and is exasperated by warm weather.

STERTOR:  Characterized by heavy snoring, snorting, and gasping during inspiration due to naso such as the stenotic pinched bulldog nose, nasopharynx, or pharynx obstruction. The sound can be heard awake or asleep with apnea.

EARLY INTERVENTION: Due to the seriousness of bulldog and French bulldog brachycephalic airway syndrome and it progressive nature early intervention is critical.

The overall prognosis for English bulldogs, french bulldogs, and other brachycephalic breeds depends on how many anatomic ab

normalities are present at the time of diagnosis and how soon they were corrected.

Sadly, the natural anatomical boundaries of the soft palate were altered as a direct aftermath of selective inbreeding. The elongated obstructing space critical for respiration thus should be surgically trimmed as early as possible….Read More

Bulldogs with this condition have an abnormal narrow windpipe that restricts airflow and proper breathing. As with the other upper airway abnormalities, narrowing of your bulldog airways can cause increased airway resistance, as well as an increase of negative intra-airway pressure.

In contrast to the common notion,  in the absence of concurrent respiratory or/and heart disease trachea hypoplasia is usually tolerated well in bulldogs as long as their elongated palate and stenotic nares are timely repaired.

Everted prolapsed laryngeal saccules are small sacs or pouches that are located just inside the larynx; these saccules turn outwards due to the abnormal negative pressure accompanying the increased respiratory effort associated with the Brachycephalic syndrome, these bulging prolapsed saccules will further obstruct airway flow thus should be surgically removed. 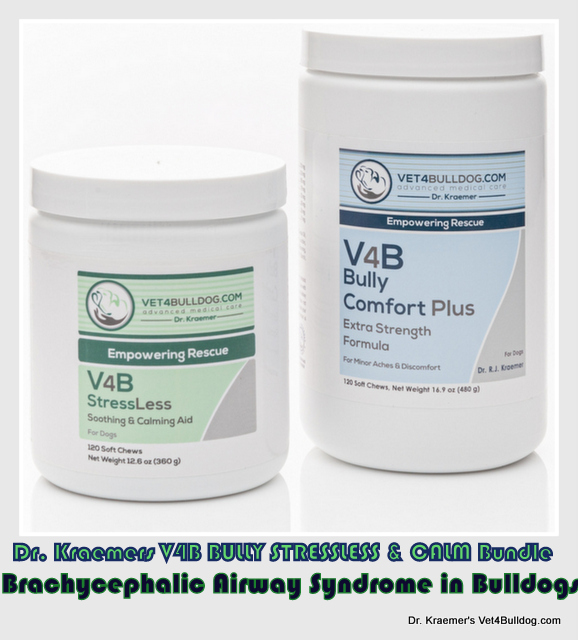 TIP #1 SURGERY: I recommend surgical repair of the elongated palate and/or stenotic nares as soon as your bully reached maturity at about 8 months of age.

TIP #2 HEAT STROCK: In an event of a respiratory crisis you should check rectal temp, normal is between 100-102.5 F. If it is over

105 F, and you can’t get to a veterinary hospital, rinse your dog with cool water and place a fan over him/her till the temp drops to 103, don’t let it go below 100F.

TIP #3 POSITIONING & TONGUE: The thick large bully tongue often retracts inward to further compound the respiratory crisis. If your bully is in respiratory distress or collapse, make sure he/she is sternal (i.e. laying on sternum/chin, rather than on the side). Pull your bully tongue so it is stretched out, keep watching the color of the tongue, pink is good, purple-blue is bad

Everted prolapsed saccules in bulldogs. Note the 2 pink obstructive bulges in the photo.

TIP #5 HARNESS: I recommend a harness rather than a neck collar to prevent airflow restriction (all bulldogs)

TIP #6 ANESTHESIA: Read my anesthesia & Sedation chapter and recommendations. I customed special pre-anesthesia bulldog protocols that include anti-vomiting, anti-stress/anxiety medication, anti-inflammatories, and pain relief. My protocol is specially designed to minimize the breed-related anesthesia risks and to maximize recovery safety

TIP#7 PRE OP TESTS: Bulldogs with BCS have an increased risk of complications associated with general anesthesia thus I recommend

WARNING#1 EDEMA: #2: In the early postoperative period, swelling of the surgical sites (laryngeal edema) may occur and interfere with breathing. Thus, we closely monitor our bulldogs after extubation.

In my opinion, the post-extubation period is the most CRTICAL part of “bulldog anesthesia”.

At my practice, we assign a trained technician to seat next to our patients and monitor vitals till they are extubated and breathing by themself for a while

WARNING #3 BREEDING: I don’t recommend breeding a bulldog who has required surgery to correct airway obstruction.

WARNING#4 LARYNGEAL COLLOPASE: Over time, bulldogs and French bulldogs with this syndrome will develop other secondary problems that further obstruct airflow. They include very large obstructive tonsils and end-stage collapsed atrophied larynx cartilages.

WARNING #5 HEART DISEASE: In the long term, the increased effort associated with breathing can put an increased strain on the heart with heart disease and failure as possible complications.

WARNING #6 VOMITING: Vomiting and gagging are common to the brachycephalic breeds (bulldogs) due to an increase in a vagal tone which is a direct outcome of the breed’s excessive upper airway pressure. This increase in vasovagal tone will further intensify in bulldogs with brachycephalic syndrome (such as stenotic nares and elongated soft palate).

Gagging and vomiting could lead to inhalation of the vomit content with Aspiration Pneumonia the most likely outcome.

Aspiration Pneumonia could have dire consequences and could be deadly particularly to one going under anesthesia.