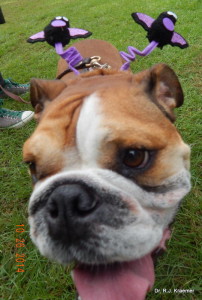 ORIGIN: The Origin of this Bulldog head nodding and bobbing is mostly unknown (idiopathic) and is concidered “benign”.

DURATION: Most ot those head shaking, tremors, nodding and bobbing in bulldogs and French bulldogs are short lasting but occasionally could last for a few minutes

Don’t panic! bulldog head shaking (bulldog head bobbing) is not an emergency nor a life-threatening event. It is considered idiopathic (arising from an unknown cause) and is harmless.

Typically, I advise distressed bulldog owners to try and have their bully move his/her head and neck, distract with a toy, or a treat.

Distraction with food, toy, “lets go play or a walk” by showing the leash, will usully stop your bulldog or French bulldog head tremours.

Seizure medication is controversial, if your bulldog has no seizure history I usually do not prescribe anything.

Bulldogs and French bulldogs exhibiting head tremors and head bobbing are usually fully alert and otherwise acting normally.   It is not a painful condition or a distress signal as far as we know.

Head tremors in bulldog and France bulldogs MYTH #1 SUGAR TREAT: Offering ice-cream or sugary liquids is not recommended. Those are often given to treat seizing bulldog and French bulldogs puppies suffering from hypoglycemia (low blood sugar) event.  Instead, you can use any food, treat or toy to simply distract your head shaking bulldog puppy.

Head tremors in bulldog and France bulldogs MYTH #2 CALCIUM SUPPLEMENT: Offering calcium supplements to a bulldog or French bulldog with a head shake has little merit and is often given by bulldog female owners who treated or read about “postpartum calcium deficiency” (i.e. eclampsia).

Head tremors in bulldog and France bulldogs TIP #2: We do not know of any other medical and/or neurological conditions that are a direct result of bulldog head bobbing.

Head tremors in bulldog and France bulldogs TIP #3: There may be a genetic link to head tremors,  head shaking or head bubbing in bulldogs and French bulldogs.

Head tremors in bulldog and France bulldogs TIP#5: Bulldogs with idiopathic head shaking do NOT develop other neurological signs as a result of this condition.

Senior Bulldog Hind Legs Sharking: Many senior bulldogs and French bulldogs owners wonder why their aging dog’s hind legs are shaking. Shaking of the extremities can happen standing up or laying down and can be progressive. Like head shaking in bulldogs, the origin of the shaking might be idiopathic. The theory is that it may be associated with disk disease, neuropathy, arthritis, myelopathies etc.

There is no known treatment for idiopathic aging bulldog leg shaking but usually, I will prescribe anti-inflammatory medication or recommend supplements like my: 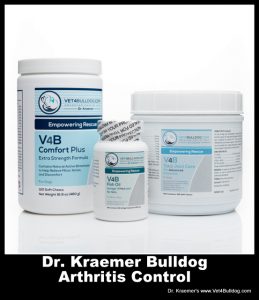 Head tremors in bulldog and France bulldogs WARNING #1: Your bulldog might be head shaking or leg shacking due to other conditions thus you should always consult your veterinarian.  Head shaking due to advanced cases of distemper virus usually also involves the jaw and leg muscles and  can be observed even while your bulldog is sleeping. Distemper encephalomyelitis is rare because of the introduction of the vaccine and its integration to our canine pet’s wellness core vaccine series.

Head tremors in bulldog and France bulldogs WARNING #2: Other types of tremors can be due to poison and toxins, hormonal abnormalities, and electrolyte imbalance.