Bulldog Cystitis and Bulldog UTI  (Bulldog Urinary Tract Infection), cystitis is an inflammatory condition of the bladder while UTI is an infectious condition. Often cystitis exists or provoked by a UTI. Both bulldog cystitis and bulldog UTI can be caused by multiple conditions. 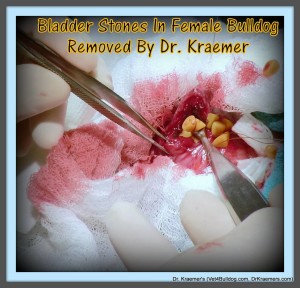 Bulldog cystitis is usually due to an infectious origin (a UTI), and rarely a sterile one

Your bulldog and French bulldog their blood and make urine, the urine then is moved down the ureters and into the bladder. The urinary bladder stores the urine the bladder can stretch to accommodate the flow of urine and then voluntarily empty it.

A bulldog UTI can present in the entire urinary tract including the kidneys (bulldog pyelonephritis) while cystitis relates to the bladder.

There are multiple conditions and diseases that can lead to cystitis and UTI in bulldogs and French bulldog, the most common are:

Generally, I recommend a urinalysis, as well as a urine culture. Radiographs and/or ultrasound are also very helpful in detecting urinary stones and other structural abnormalities.

Identifying the signs of cystitis or bulldog UTI is relatively simple. Bulldogs suffering from this infection will often present with: 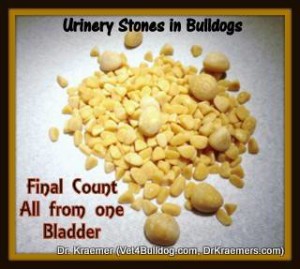 Keep your female English bulldog or French bulldog puppy’s vaginal folds dry and clean. I recommend using a wipe like Dr. Kraemer’s “V4B Bulldog Skin Fold Antiseptic Wipe” once or twice daily. The bacteria and yeast found in these folds can ascend into your bulldog puppy’s urinary tract and cause chronic recurrent UTI.

4. TOPICALS: Keep your female English bulldog or French bulldog puppy’s vaginal folds dry and clean. I recommend using a wipe like my “V4B Bulldog Skin Fold Antiseptic Wipes” once or twice daily. The bacteria and yeast found in these folds can ascend into your bulldog puppy’s urinary tract and cause chronic recurrent UTI.

Tip #2 HYDRATION: It is also recommended to increase the amount of water your bulldog and French bulldog consume to help prevent crystallization and new stone formation. This can be achieved by providing your pet with extra drinking water, as well as moist food.

Warning #1 TESTING & DIAGNOSIS: It is important to get your bulldog to a veterinarian as soon as possible for testing, as this condition can be quite painful for your pet, and it can lead to additional complications.

Warning #2: BLOCKAGE: Male Bulldogs have a long and narrow urethra, while female bulldogs have a short and wide urethra. Thus, bulldog males are at a much higher risk of a urinary urethral blockage, even small stone(s) can prevent urination. These cases are considered emergencies; the obstructing stones should be removed as soon as possible.