Constipation and Megacolon in Bulldogs and French Bulldogs

Constipation and Megacolon in Bulldogs and French Bulldogs can be painfull, cause major discomfort and lead to serious illness.

Constipation and Megacolon in Bulldogs PRESENTATION:

The longer your bulldog constipation lasts the harder and dryer it becomes and the more difficult it is to pass.

Prolong unattended bulldog constipation could lead to a full colonic impaction, obstipation, and bulldog megacolon which is an abnormal dilation of the large intestine.

signs of constipation in bulldogs

Some of the common manifestations of those conditions include:

English Bulldog and French bulldog megacolon is a medical hypomotility condition and a severe dilatation of the colon, most commonly due to poorly managed chronic constipation.

Constipation and Megacolon in Bulldogs and French Bulldogs CAUSE:

Note the large fecal balls in this Fr. Bulldog Colon (in front of the pelvis) 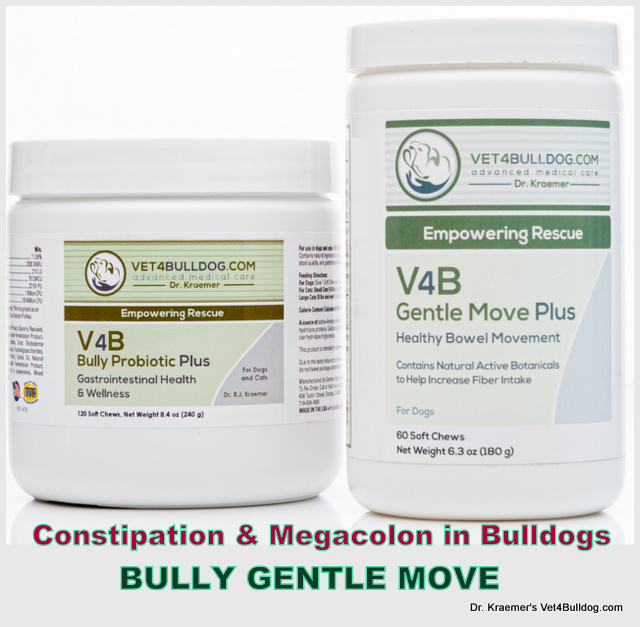 Canned food and mixing the food with water can help with hydration.

Constipation and Megacolon in Bulldogs and French Bulldogs TIPS & WARNINGS:

Bulldog Megacolon Tip #2 RX: Discontinue any medications that may cause constipation.

Warning #2 BULLDOG LAXATIVES: laxatives should be discouraged unless necessary to avoid constipation.

Warning #3 BULLDOG COLECTOMY: Subtotal colectomy a risky and last resort surgical procedure, is a risky last resort option. Its expensive and the outcome are rarely optimal.

Bulldogs who had colectomy will need lifelong home care and monitoring

Warning #4 BULLDOG MEGACOLON: bulldog and French bulldog chronic constipation can lead to bulldog megacolon due to: