Interdigital Cyst in Bulldogs and French Bulldogs are common to the breed and is often a lifelong challenge. Other names for interdigital cysts are Bulldog Interdigital Furuncles and Bulldog Pododermatitis, though they are not always one and the same.

Most owners associate bulldog and French bulldog interdigital cyst with the bright, red, puffy, sometimes erupting lesions as seen in the interdigital web space when visualized from above.

Histologically, the lesions are nodular and not a true cyst (a cyst is a closed sac structure filled with liquid).

True interdigital cysts can be visualized under the toes and are usually due to trauma to the paw, or more precisely injury to the hair follicles embedded in the paw.

Direct injury to the paw hair follicles, can cause abnormal hair growth and plugging of the follicle. 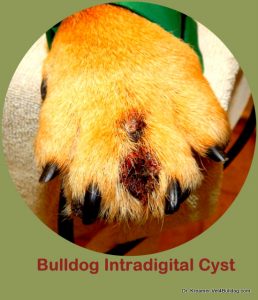 Interdigital Cyst in Bulldogs and French Bulldogs RULE of THUMB:

Bulldog interdigital cysts can flare-ups sporadically, it can be a lifelong cyclical problem, thus requiring lifelong preventionb and care

Interdigital Cyst in Bulldogs and French Bulldogs CAUSE

Bulldogs are predisposed to interdigital cysts due to their inherent body type, confirmation, excessive prominent webbing, and thicky thorny hairs. Interdigital cysts are caused by trauma to the growing short bristly hair shaft located in the web pushing it backward back into the follicle.

The ” web ingrown follicular hairshaft” will cause a wound, inflammation presented by the typical bloody blister which often become infected.

An inexpensive, safe, and effective bulldog interdigital cyst care and maintenance is a daily soak with lukewarm water mixed with Epsom salts and an antibacterial solution like Dr. Kraemer’s V4B Antiseptic Rinse XS,

A daily anti-yeast and antibacterial medicated products like wipes, rinse or spray

Ideally, the therapeutic antiseptic topicals are combined with therapeutic supplements such as: 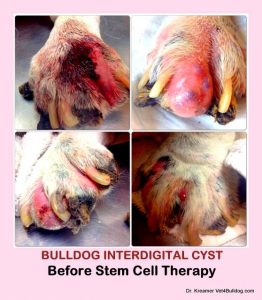 Bulldog Fusion podoplasty surgery is the last resort option and should be considered if all medical avenues have failed!

It should be done only by an experienced surgeon who already performed the procedure successfully in the past.

Post-up surgical management must be done diligently; it is very time-consuming and in its first phase requires daily wound management and bandage changes. It also might require a splint to help reduce tension on the wound.

I recommend a few days of hospitalization to allow proper confinement, nursing care, and management by an experienced veterinary team. After releasing the patient, you should keep a protective boot on the foot for about 6 weeks.

Tip #1  BULLDOG FOOD ALLERGY: If your bulldog or French bulldog suffers from an interdigital cyst and is also itching his belly, ears, and other areas you should suspect allergies as the underlying cause. Food allergy should be suspected when your bulldog is also suffering from gastrointestinal problems like indigestion and gas. Atopic allergies should be controlled with itch control medication. 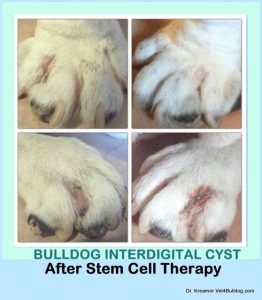 Tip #2 TREATMENT DURATION: Treating Bulldog and French Bulldog interdigital cysts often include systemic medication for both the itch and inflammation, as well as the yeast and bacteria. The treatment should continue for a few weeks and often requires a much longer treatment duration.

Tip #3 WEIGHT LOSS: Overweight Bulldogs and French Bulldogs are at risk for interdigital cysts due to abnormal weight-bearing distribution and secondary increased friction between the skin and footpads. Weight loss for overweight bulldogs will be beneficial.

Tip #4 IMMUNOTHERAPY: If itch atopic dermatitis is suspected a VARL test is recommended to help identify the environmental allergen followed by immunotherapy. Immunotherapy can save the owner money by reducing the dependency on anti-itch and antibiotics drugs. Immunotherapy is a safe, cost-effective, and medically effective treatment option for long-term control of bulldog atopic dermatitis.

Tip#5 FOOD TRIAL: If a food allergy is likely, then I recommend a 3-4 month trial prescription hypoallergenic elimination diet with a novel protein or hydrolyzed protein. 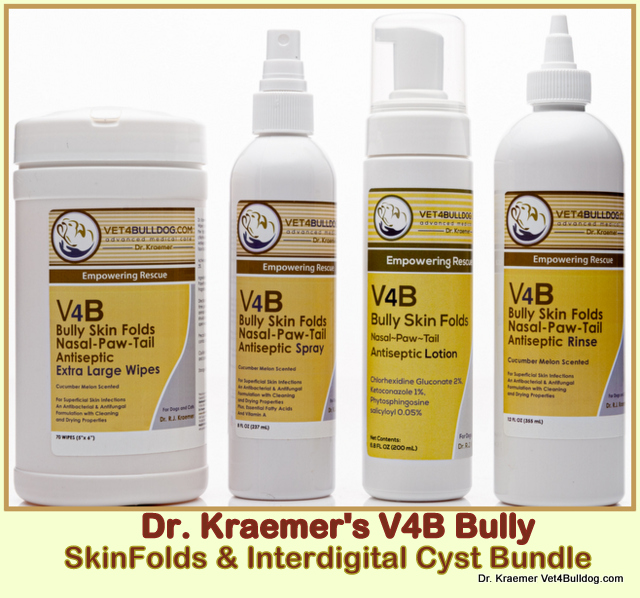 Warning #3 FRICTION: Any chronic friction of opposed surfaces of your bulldog’s toes can cause an interdigital cyst.

Warning#4 STEROIDS: Dependency and excessive use of steroids can lead to serious adverse effects. There are new, non-steroidal, anti-itch medications and injections in the market, as well as non-pharmaceutical, anti-inflammatory, healing modalities like stem cell therapy, PRP, PEMT, and Cold Laser Therapy.

Warning #5 FOXTAILInterdigital cysts in bulldogs can be confused with a foreign body like a foxtail.