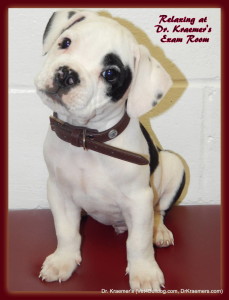 American Bulldog and American Bulldog Puppy, unlike their English counterparts, are swifter and more agile. This is mainly due to their long legs and raised body, which does not sit as close to the ground. However, the American Bulldog, like the English bulldog, is also stocky, weighing between 60 and 120 pounds. They have a more muscular build with long, thick, strong, and straight front legs and thick, broad, well-toned, and muscled hindquarters. American bulldogs also have a similar facial structure to the English bulldog, with a large head, strong jaw, and sharp bite.

Despite the American Bulldog’s intimidating appearance, American bulldogs are confident, social animals who love people and children, and are devoted and loyal pets to their owners. American Bulldogs were originally bred for hunting and farm work, making these strong, obedient, agile, and smart animals great helpers when it comes to physical work.

BREEDER Tip 1: I recommend that you seek a reputable breeder.

VETERINARIAN Tip 2:  Have your bulldog puppy screened by a veterinarian who is familiar with the breed’s unique medical problems.

RESCUE Tip 3: Before buying a new bulldog or bulldog puppy, you might consider checking your local rescue. The cost of a rescued puppy is much lower, and you will have the added bonus of saving a bulldog that is in desperate need of a loving family and a new home. For more information on how to adopt a rescued bulldog and how to support and Empower Rescue, click here.

BULLDOG 101 Tip 4: Before and after buying, or adopting, an American bulldog puppy or other brachiocephalic breed pets, like English and French bulldog puppies, read my Zen & Bulldog Maintenance “bulldog 101” chapter. This chapter is the cornerstone of my website, written in simple text and is complemented with photos and videos. You will learn how to become a “Bulldog Certified Yoda Master”, keeping your bulldog puppy healthy, with minimal cost.

Tip 5: due to their shape and size, in combination with their many wrinkles and skin folds, American bulldogs are prone to several ailments, including: