Poisons and Toxins in Bulldogs and French Bulldogs

Poisons and Toxins in Bulldogs and French Bulldogs

Poisons and Toxins in Bulldogs and French Bulldogs can be food items like chocolate, grapes/raisins and chewing gums, household items, plants like cannabis and palm, OTC like asperin, pesticides, your prescription medication and many more.

Below is a list of some of the common ones I see in my practice:

Poisons and Toxins in Bulldogs and French Bulldogs ASPIRIN

NSAID is an acronym that stands for “non-steroidal anti-inflammatory drug.”

This class of drugs includes popular pain, ache, swell, anti-clotting,  and anti-inflammatory medications such as: 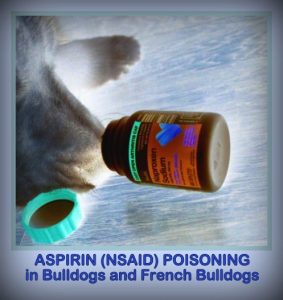 Unfortunately, those drugs are often manufactured as a palatable chew or are sweetened which makes it a prize treat for your bulldog and French bulldog pet.

Other: liver toxicity and seizures.

ASPRIN POISONING IN BULLDOGS DO NOT:

Poisons and Toxins in Bulldogs and French Bulldogs XYLITOL

Xylitol is a natural sweetener that most of you are familiar with and likely using or ingesting in some capacity in your everyday life. Xylitol is used extensively as a replacer for common sugar due to its low caloric and glycemic index.

Xylitol can be found in the low-calorie food section at your local grocery, in the weight management and diabetic section, and at the dental-care section. 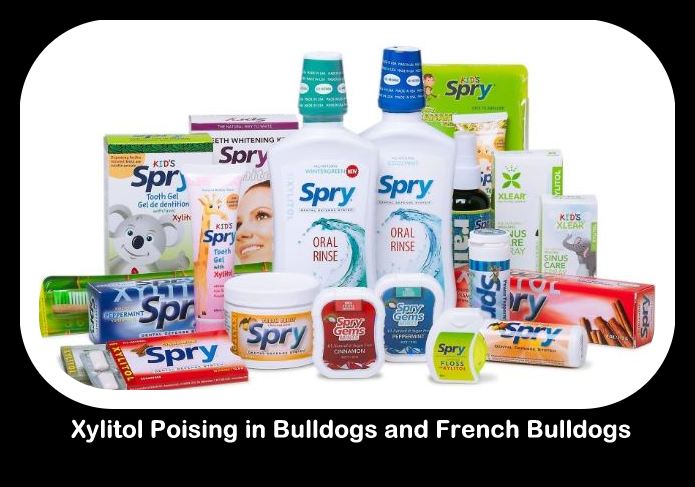 Even a trace amount of Xylitol can be toxic to your so If you suspect that your bulldog and French bulldog ate a xylitol-containing product, please seek veterinary help ASAP

Due to the immediate hypoglycemic effect of Xylitol ingestion, your bulldog is likely to exhibit:

There is no specific test of Xylitol Toxicity

Low blood sugar, clinical signs listed above, and any suspicion of your bulldog digesting a Xylitol product should prompt Xylitol Toxicity as a high likelihood and immediate course of action

There is also no specific antidote to xylitol, the treatment is symptomatic and supportive

Poisons and Toxins in Bulldogs and French Bulldogs Grapes and Raisins

Grapes and Raisins Poisoning in Bulldogs and French Bulldogs can happen due to ingestion of any amount of grape containing products including raisins, cereals, or granola with raisins

GRAPES & RAISINS POISONING IN BULLDOGS  CAUSE

Grapes and raisins are renal toxic (i.e. Kidney Toxic)  but the exact cause within the grape is not known (possibly a grape fungus).

Clinical signs can start in 12-48h and may include vomit, diarrhea, excessive drinking and urination, and other symptoms related to kidney failure.

If you have any suspicion of your bulldog ingesting the grape-containing product, please call poison control and go to your nearest emergency.

Tragically, a severe case of grape poisoning might lead to a complete shut down of your bulldog kidneys and death.

Unfortunately, clinical signs are not specific, but blood and urine tests will show abnormalities consistent with renal failure.

Prognosis depends on many factors such as your dog’s sensitivity to the poison, the amount ingested, duration from ingestion time to treatment initiation, etc.

Inducing vomiting, and stomach lavage, and coating the stomach wall with a protectant that prevents poison absorption/digestion is ideal but timing is critical.

Hospitalization on fluid therapy and kidney values monitoring will be needed.

WARNING: Unfortunately, regardless of size, age, gender, and breed every dog’s tolerance are different, thus even small amounts (1-2 grapes) can be toxic.

Any amount ingested grapes or raisins should be considered an emergency.

Poisons and Toxins in Bulldogs and French Bulldogs RAT POISON

Rat Poison in Bulldogs and French Bulldogs, there are three types of rat poison but the most common are anticoagulants and bromethalin (the third one is cholecalciferol).

Timing is critical,  removing the poison by inducing vomiting and coating the stomach to prevent its absorption is only effective soon after ingestion. 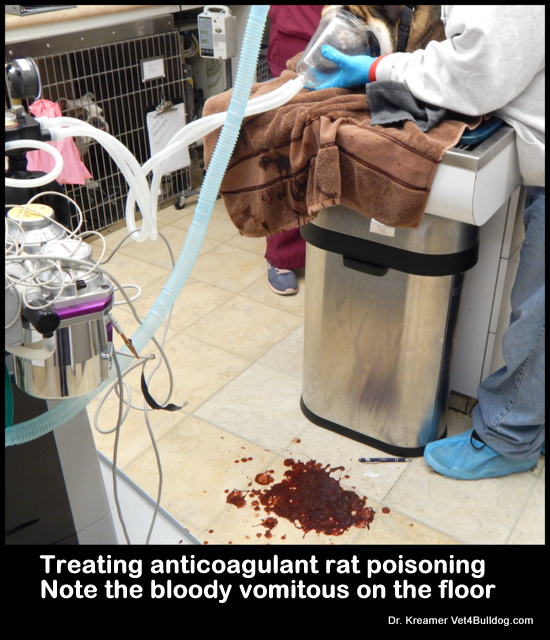 Your veterinarian can often confirm the poisoning and related clotting deficiency by running a lab panel that includes clotting factors.

VITAMIN K: The bleeding can be reversed with Vitamin K given by injections and orally. At times your bulldog might need a blood transfusion, oxygen support, and hospitalization.

The prognosis is good if treatment started early.

Bromethalin rat poison poisoning affects the CNS manifested by swelling (edema) in the brain. Clinical signs in a bulldog who ingested this type of rat poison can start quickly as early as 24h from ingestion, it usually manifested with seizures, tremors, anorexia, and depression.

Unfortunately, there is no antidote for this poison thus supportive therapy with IV fluid and medication to reduce the brain swell is all that can be done. If the pet survives, they often don’t want to eat for an extended time and will need to be supported and fed.

Prevention is key, be watchful for dead mice and rats, and remove them before your bulldog gets to them.

If you place rat poison in your home or business always make sure that pet’s cant reaches it.

Poisons and Toxins in Bulldogs and French Bulldogs SAGO PALM

There are a lot of poisonous plants out there, but few cause fatalities in bulldogs and French bulldogs like this one.

Unfortunately, I personally experienced two tragic cases in my practice one of a young French bulldog puppy of Sago Palm poisoning.

All parts of the Sago Palms are poisonous, but their seeds are exceptionally deadly

The poison is “cycasin” and even ingestion of a few seeds can be catastrophic.

I have seen the Sago Palms in my neighborhood yards (southern Ca) and local nurseries (see the photo I snapped at a nearby home depot store). Be aware, Bonsai Sago Palms are also popular as house decorative items and gifts.

Sago Palm poisoning clinical manifestation can begin quickly thus if you suspect that your pet ingested any parts of this plant please seek emergency care immediately.

1.  If you can get to an emergency hospital right away try to induce vomiting with oral hydrogen peroxide or Ipecac
2. Treatment will include inducing vomiting, stomach pumping, and a stomach protective coating to hopefully remove the poison before it gets into your bulldog system.

Supportive care is all we can do to improve survival (there is no antidote) and will include:

If you are a pet owner I recommend removing those plants from your home and yard.