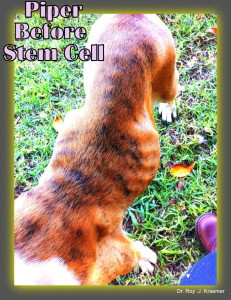 Piper a rescued bulldog before stem cell therapy at 23 Lb. Note the bone sticking out

s, multiple immune suppressant drugs with high risks of unintended serious side effects, various supplements and specialty hypoallergenic diets, only to see Piper wasting away to a critical state. The rescue and Viki, who mothered her through it all with dedication, were devastated and desperate. We had discussed stem cell therapy in the past, and both Viki and SCBR were prepared to take the leap of faith. I explained that it would be experimental, but at this point we had nothing to lose. We had used regenerative therapy successfully on many patients with arthritis and orthopedic problems but never for immune mediated diseases.

Mel (SCBR): So what made you think that stem cell therapy would succeed where traditional and holistic medicine failed?

Dr. Kraemer (stemcell4pet.com): First, I should explain that Inflammatory Bowel Disease (IBD) is an autoimmune disease. For the purpose of this interview I am going to simplify the disease process with a simple illustration. Think of our cells as “self”, each one of us is born with a personal cellular marking coded by receptors unique to us and us alone. Think of those receptors as a “lock” and our immune system as the “key”. If the key and the lock are not a perfect match, our immune system would consider that cell “foreign” and would attack it. In Piper’s case, the receptors (i.e “locks”) of her GI tract were altered for some unknown reason, thus her immune system considered those cells as an “enemy” and responded by going into attack mode, inflicting cellular damage, manifested by the severe inflammatory state the disease is known by. It’s easy to understand why, traditionally, we treat auto immune disease with immune suppressant drugs though, as you can imagine, even when we succeed, this approach possesses a possible harmful adverse effect as well as possible lifelong therapy. In contrast, Adult Stem Cells, which we all store in our body (bone marrow, blood and fat) are our own natural repair cells. They are typically used by all of us as we grow older (wear and tear) or when we get injured to replace damaged cells and fight inflammation. There is large volume or research showing stem cell therapy to be effective treating immune mediated and inflammatory induced disease like IBD and KCS in bulldog as well as polyarthritis and degenerative myelopathy. 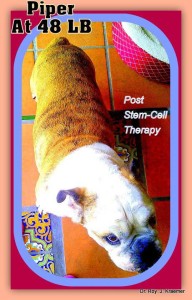 Mel (SCBR): That is so interesting, I know about the controversy of embryonic stem cell therapy. But I have not heard about regenerative medicine as it applies to “adult cells”. I can now see why you thought they would benefit Piper and her IBD condition.

Dr. Kraemer (DrKraemers.com): Stem Cell Therapy has been demonstrated to induce profound healing activity. Besides healing damaged tissues and promoting the regeneration of damaged areas, stem cells have the unique ability to modulate the immune system while preserving disease fighting capabilities. They produce anti-inflammatory agents to protect the dog from the immunological self-attacks (as in Piper’s inflammatory bowel disease).  Piper was truly a fighter. She had everything going against her and, despite that, she had made it this far. I contacted MediVet America and told them about Piper’s dire situation and they offered to donate a free small stem cell kit. It was the first time I attempted to treat inflammatory bowl disease (IBD) in a bulldog or any pet for that matter in.

Dr. Kraemer (Stem Cell For Pets inflammatory Bowel Disease) : We gave the entire 2 cc Stem cell yield intravenously to piper. Within 2 weeks Piper transformed from an emaciated 23lb to a 35lb (that’s about 50% weight gain in only two weeks) with the diarrhea firming to soft pudding

Mel (SCBR): Did she continue to improve?

Dr. Kraemer (Stem Cell For Pets inflammatory Bowel Disease): we were so overwhelmed by the dramatic improvement, after the ineffective nine month of expensive harsh medicine with no improvements. We decided to order a second kit and this time we cryobanked an additional treatment I gave again 60 days later.

Mel (SCBR): was those new stem cell treatments helpful as the first one? 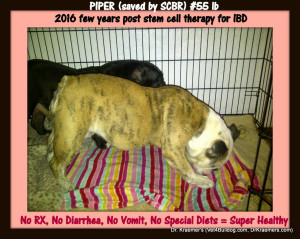 Dr. Kraemer (Stem Cell For Pets inflammatory Bowel Disease): to make a long story short, she rapidly continues to improve gaining weight, and the stool got firmer. We took her off all the medication and special diets and kept monitoring her progress. Month by month year after year Piper continue gaining weight and improving. For the last few years her weight has been maintaining at an healthy 55 lb. Her stool is normal, she is eating regular dog food and never had to go on medication again. She looks like any other healthy bulldog.

Dr. Kraemer Final note (Stem Cell For Pets inflammatory Bowel Disease): Piper just came to visit me the other day at our new state of the art hospital Vet4HealthyPet Advanced Medical Care located at 434 South Tustin St in orange. It has been over four years since the last stem cell treatment. She is now a senior bulldog still living with Viki one of our senior SCBR founders who was her fostering mom from day 1.  She is still consider by all of us as a true miracle and a testament to regenerative medicine (stem cell therapy) healing power and potential.

In closing, I would like to thank MediVet America for their amazing patented stem cell technology and their original donation. Of course I can’t say enough about SCBR, the dedicated volunteers, and their amazing rescued bulldogs. If you were inspired by this story and would like to help our non for profit bulldog rescue you can pledge here.  Or call SCBR and find out what can you do to help