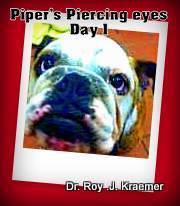 Pets Inflammatory bowel Disease cured by stem cells: In late October 2011 , Piper,  a sweet and friendly English Bulldog, was left at the shelter by her owner who requested that she be put to sleep. SCBR  received a call from the shelter about the abandoned sick bully. After speaking with the vet at the shelter, it was suspected that the owners knew something was wrong with Piper opted to dump her and let a stranger euthanize her rather than trying to take on her medical problems. Mel, a long time team member from SCBR, went to the shelter to pick her up that day and took her to see Dr. Kraemer immediately due to her obviously bleak  medical state.

Dr. Kraemer (StemCell4Pet.com): So, Mel, how did you find Piper when you arrived at the shelter?

Mel (SCBR): Piper was filthy, covered in feces, fleas and dirt, she barely had enough energy to get up and walk of out of her kennel. I physically had to pick her up and carry her to my car.

Dr. Kraemer (DrKraemers.com):  What happened next?

Mel (SCBR): I knew she was in a critical state so I immediately drove her to see you at your Animal Hospital so she could be examined and treated.  During the entire car ride to your Animal Hospital, which was about an hour’s drive away, Piper could barely keep her eyes open. She stayed curled up in the passenger seat with her head as close to me as possible. She was scared and clearly ill.

Dr. Kraemer (vet4healthypet.com):  Yes, I remember seeing her for the first time that day, she was severely emaciated, just skin and bones. All you could see was this familiar bully head with two big eyes (see photo). We had her weighed (she was only 23 lbs) and then we took her to the ICU to be examined. Shortly afterwards she vomited and collapsed. We immediately placed an IV catheter and started fluid replacement. Symptomatic treatment was initiated and lab work was ordered.  In addition to the vomiting, she had explosive, non-stop, watery diarrhea that did not respond to our initial treatment. 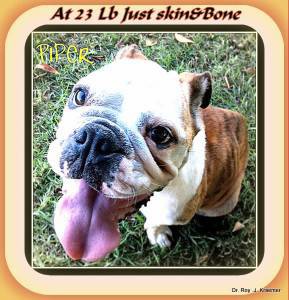 Mel (SCBR): It was sad seeing her drifting in and out of consciousness, struggling to hold on. It’s uncertain how much longer she would have survived in the shelter without medical attention.

Mel (SCBR): After you did the initial workup, what did you conclude was the likely diagnosis (i.e. the medical condition underlining her problems)?

Mel (SCBR): Did you see any improvement of Pipers IBD?

Dr. Kraemer (Pets Inflammatory bowel Disease cured by stem cells): Unfortunately, from a medical point of view,  there was very little  improvement of her IBD.  Though the vomiting stopped, the diarrhea was as bad as before and she continued to lose weight which was very worrisome. The only positive was her fun-loving demeanor that surfaced as soon as she started getting all the attention and love.

Mel (SCBR):  So what was your next step in treating her chronic diarrhea and weight lost due to her inflammatory bowl disease?

Dr. Kraemer (Pets Inflammatory bowel Disease cured by stem cells): After seeing no significant change of her IBD, I decided to refer Piper to an internal medicine specialist whom I have known for over a decade. Dr. D added some new tests and tweaked the treatment adding a second immunosuppressant (imuran), Tylan powder, and vitamin K. 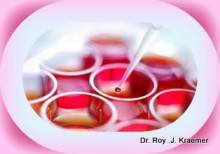 Mel (SCBR): Was any progress made with that additional treatment to her IBD?

Dr. Kraemer (Pets Inflammatory bowel Disease cured by stem cells): None of the medications were helping, months went by and we all become increasingly frustrated and worried. Piper still suffered from the same explosive, chronic diarrhea; her body was not retaining any of the nutrients or vitamins essential for a healthy lifestyle and weight gain.  Viki, who is one of the SCBR founders, was her foster mom. She took upon herself Piper’s rigorous daily care which included medicating, special feeding and the unpleasant task of cleaning piles of never-ending diarrhea. I believe, at this point, I started discussing the stem cell therapy option with her for the first time. It was then decided to first seek guidance from a pet nutritionist and holistic specialist.  Diet plays a key role in treating IBD, and finding the right diet that would work with Piper’s system would be a challenge.  With the help of a pet nutritionist, we were hoping to find a diet that worked for Piper and would allow her body to correctly absorb the nutrients of the food so that she could gain weight. The holistic specialist also changed the cortisone (immune suppressant) to a different kind, gave Viki a recipe for a homemade diet that Viki cooked for Piper with love and care every day. Sadly, nothing was working despite everything we tried. At this point Piper’s weight dropped to a new low; a mere 23 lbs, and we did not think she would last long at this rate.

Mel (SCBR): Do you remember what the turning point was when the Stem Cell Therapy option finally came to the forefront?