Sevoflurane Anesthesia is Superior and Safer for Bulldogs and French Bulldogs and is what I recommend for any bulldog and french bulldog procedures conducted or preformed with a vapor (inhaling anestetic). Here is a list of some of the main reason for my inhaling anesthetic prefrences and recomndation: 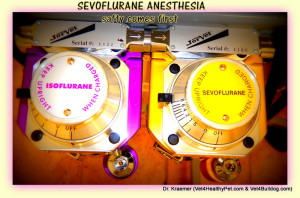 1. Bulldog RECOVERY: Sevoflurane is less soluble than isoflurane, which means that bulldog and French bulldog inductions and recoveries are even faster.

2. Bulldog INDUCTION: Mask inductions with sevoflurane were faster and of better quality than with isoflurane.

3. Bulldog LOW IRRITABILITY: Sevoflurane also appears to be better tolerated than isoflurane for bulldogs and French bulldog mask induction, because it has low pungency and low airway irritability.

4. Bulldog FAST RECOVERY: Sevoflurane recovery from anesthesia is faster than isoflurane thus it would be preferential in a non-painful bulldog and French bulldog procedure on an “out-patient” basis.

5. Bulldog DEPTH OF ANESTHESIA: the ability to change the depth of anesthesia is quicker with sevoflurane and slower with isoflorane which means you can “lighten” the depth of bulldog and French bulldog anesthesia quickly.

7. Bulldog SPEED: Sevoflurane is also more convenient than isoflurane for an uncomplicated, non-painful short bulldog and French bulldog procedure where you want to send the pet home as quickly as possible.