Spaying Bulldogs French Bulldog Puppies are some of the most routinely performed elective surgeries in bulldogs female . When inquiring about spaying, many bulldog owners want to know, when is the ideal time, what are the health benefits of spaying a female bulldog, and what are the risks.

Most English bulldog and French bulldog owners are concerned about the anesthetic risks.  These are very legitimate concerns and should not be overlooked. Keep in mind that procrastinating could add to those risks rather than reduce them. Learn more HERE.

WEIGHT GAIN MYTH: some of the alleged risks associated with spaying bulldog and French bulldog puppies are obesity, weight gain, and inactivity
WEIGHT GAIN FACT: those allegations should be attributed to your bulldog lifestyle, examples are:

PERSONALITY MYTHS: Other common accusations attributed to spaying is the alleged adverse effects on your bulldog’s personality, including:

PERSONALITY FACT: There is no medical or clinical research that supports those claims.

The best way to keep your bulldogs sharp and fit is to:

Those are the true essentials for your bully development, physique and intelligence.

Dr. Kraemer has a long-standing collaborative relationship with bulldog rescue.  We recommend that you contact your local bulldog or French bulldog rescue before you purchase a new bulldog puppy. The adoption fee is a fraction of the cost of buying a bulldog puppy from a breeder, and you will also be providing a home for a bulldog in need!

As a rule, all rescue bulldogs are spayed or neutered prior to adoption.

Spaying your bulldog and French bulldog puppy at a younger age will likely extend their life span and quality of life.

I recommend spaying your bulldog puppy when she is at least 6 months old and no later than her second or third heat cycle. 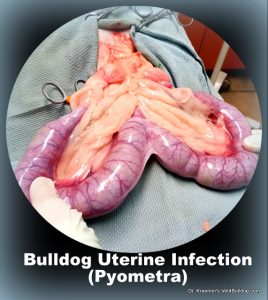 OTHER FACTORS Tip #1: Even though spaying your bulldog early in life can prevent certain diseases, there are many other contributing factors such as environmental factors, nutrition, and genetics.

STEM CELL Tip #2: We offer a low-cost, minimally invasive, and minimal risk stem cell therapy cryobanking program that is performed at the same time as your bulldog’s spay surgery. When our bulldog owner schedules an elective surgery like a spay or neuter, they can also request that we harvest their pet’s stem cells (stored in adipose tissue near the spay surgical site), and then ship them to be cryobanked as “insurance” for future medical emergencies and illnesses. These stem cells are anti-inflammatory, healing repair cells that can help treat a wide range of illnesses and medical conditions. For the life of your pet, you will be able to call at a day’s notice and ask to retrieve and ship your bulldog cryobanked stem cell treatments. Fortunately, most pet insurance companies recognize the benefits of stem cell therapy, and thus, cover the procedure.

ANESTHESIA Warning #1: You should search for a hospital that is familiar with the breed-specific anesthetic requirements and Sevoflurane. You should also ensure that the hospital you choose employs a medical team that is versed with breed-specific induction, as well as breed-specific recovery, safety protocols, and monitoring.

BCS Warning #2: If your bulldog puppy is exhibiting any of the brachycephalic syndrome complications, such as elongated soft palate, everted saccules, or stenotic nares, they should be repaired prior to, or during, the spay procedure.