A Bulldog Used as a Bait Dog Rescued By SCBR 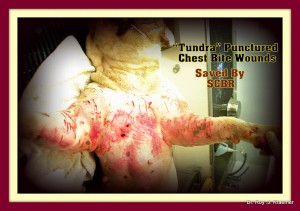 “Tundra”, a pit bull/bulldog mix was used as bait in illegal organized dog fights. She was rescued by SCBR after she was found wandering around severely wounded. She suffered from numerous painful bite wounds – a few of them, wounds inflicted to the chest and lungs (pneumothorax) that were extremely dangerous. Skip Van Der Marliere, the founder of SCBR, went to pick her up and transported her to see Dr. Kraemer, at his Animal Hospital “She was in so much pain, and terrified, I had to ask Dr. Kraemer’s staff for help just to get her into ICU for fear I would get bitten” recalls Skip.

After evaluation and medical care, Dr. Kraemer stabilized her with fluid replacement (IV fluid), pain medication and antibiotics and then took her to surgery.  After extensive surgery and a few days in intensive care, “Tundra” began to recover, attended with CARE & LOVE by Dr. Kraemer’s staff and the rescue volunteers with regard to her still-lingering emotional scars and mental trauma. Skip contacted Tia from the “Pit Bull and Parolee” rescue group to see if “Tundra” could continue her rehabilitation with her. The next day Tia came with her crew to visit and soon after Tundra was given the OK and moved in with Tia. To watch Tundra’s story as told on the popular Discovery Animal Planet “Pit Bulls And Parolees” series go to ourMediaRoom. 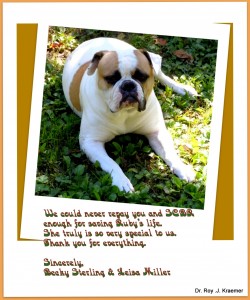 Update: Tundra made a complete recovery and was ready for adoption. Tundra is now “Ruby” and is living in Arizona with a loving couple who adore her. They came from Arizona a while ago to visit me and I could immediately tell that the abuse and emotional trauma were long gone, only a few physical scars are left as a reminder of the contrast between cruelty and love.

Dr. R.J. Kraemer
Dr. Kraemer is a Tufts Veterinary School 1991 Graduate (Boston, MA). He is a member of the AVMA (American Veterinary Medical Association) and the SCVMA (Southern California Veterinary Medical Association) and has been practicing veterinary medicine and surgery in Orange County, California for over 20 years. Dr. Kraemer has a special interest in Bulldogs, French Bulldogs and other Brachycephalic breeds, and their unique medical and surgical needs, such as breathing and airways conditions, joint pain, ligament and tendon injuries, ear canal disease, skin and allergy problems, eyes and eyelid abnormalities, as well as other medical conditions related to the breed. Dr. Kraemer is also a leading provider for in-house same-day stem cell therapy and cryobanking for dogs and cat. Dr. Kraemer has a long-lasting relationship with bulldog rescue, he provides shelter, medical and surgical services to their bulldogs.
Disclaimer
Important: This site has been setup purely for non-commercial use. All images are copyrighted to their respective owners.
Connect with Us
important information
French Bulldogs English Bulldogs
Address
Refund Policy
Privacy Policy
Terms and Conditions
*Free Shipping On Orders Over $150 Within The USA*
Contact Info
Dr. Kraemer Vet4Bulldog
434 S Tustin St B,
Orange, CA 92866
Phone: 949 899 6642
Email: Contact Us
Check out Vet4Bulldog on Yelp
Copyright © 2018 Dr. Kraemer Vet4Bulldog - All rights reserved. | Sitemap | All content on this website is the property of Vet4Bulldog unless otherwise noted absolutely no content can be copied or reused in any way on other websites.
Ask Dr. K / Q & A Request an Appointment Email Us
Missing bulldog found 80 miles away 4 years later: ChicoBulldog Rescue Success Stories
The 3 Limb Bulldog: DieselBulldog Rescue Success Stories