Breathing Problems Bulldogs French Bulldogs puppies include some of the most common respiratory and airway disease’s in the breed such as bulldog elongated soft palate and French Bulldog stenotic nares. Each topic  is going to be divided into four major sections:

The term “Brachycephalic” is Latin for a smooched face. This “pushed in” signature look of the common bulldog has an undesirable effect on the entire anatomy of your bulldog neck and head and its relation to the respective soft tissue and structures. For some bulldogs, this can lead to serious medical problems that in most cases if not corrected will get worse over time… Read More 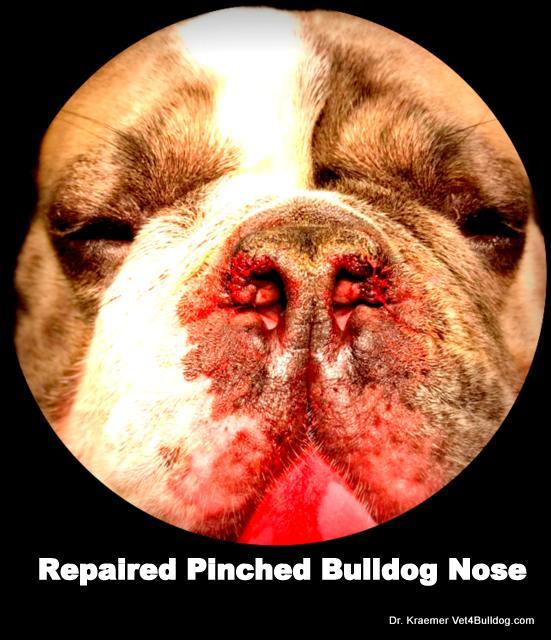 This term refers to narrowed nostrils, which cause a restriction in the amount of airflow into your French bulldog nostrils. This problem can be surgically corrected by removing a wedge of tissue from the nostrils to allow improved airflow….Read More

Sadly, the natural anatomical boundaries of the soft palate were altered as a direct aftermath of the selective “cute smooched face” inbreeding, invading, and obstructing space critical for respiration. The obstructive tissue should be surgically shortened to improve airflow…. Read More

Aspiration Pneumonia in Bulldogs and French bulldog puppies happens when the lower respiratory tract becomes inflamed due to inhalation of foreign material, most commonly gastric content (vomiting), and/or esophageal content (regurgitation). This results in serious damage to both your bulldog puppy lungs and surrounding tissue. Unfortunately, as the inhaled matter is usually laden with bacteria, Infection can often …….Read More 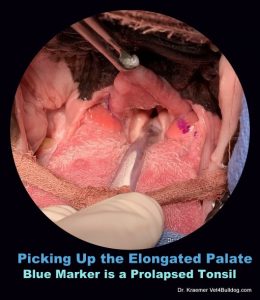 Check back in the coming weeks for information on the “Bulldog Respiration & Breathing-Maintenance topics” listed below. To receive an email whenever a new bulldog article is published, simply add your email to our “Join Our U4B Community” membership listing or to our “alert” email box at the top left corner. In addition, you will also receive alerts for any new release of my upcoming   ”Do It Yourself V4B Bully Maintenance Videos”.

Evert, prolapse, turn outwards due to the constant negative pressure and suction associated with the increased respiratory effort caused by the other common bulldog airway condition such as stenotic nares and/or the elongated soft palate. Everted laryngeal saccules will further obstruct airway flow already compromised by the other structural abnormalities mentioned in this chapter (i.e. bulldog elongated soft palate, stenotic nares, hypoplastic trachea).…(coming soon, sign for our email alert)

The trachea or windpipe of a bulldog is smaller in diameter than in normal dogs, which causes restricted airflow. Any abnormality in the upper airway or narrowing of your bulldog’s airways can not only cause increased airway resistance but also increase negative intra-airway pressure…..(coming soon, sign for our email alert)

The problems associated with BCS progress over time leading to increased suction, inflammation, and fatigue of the tissues surrounding the larynx. This could lead to severely enlarged, swollen tonsils which can further obstruct your bulldog’s airflow. In this case, a tonsillectomy (removal of the tonsils) is recommended…(coming soon, sign for our email alert)

A protrusion of the abdominal esophagus or part of your bully stomach through the esophageal hiatus of the diaphragm into the chest cavity or part of the stomach into the terminal esophagus through the hiatus (tear, opening). It could be congenital (born with) or acquired and is more common in bulldogs than most breeds….(coming soon, sign for our email alert)