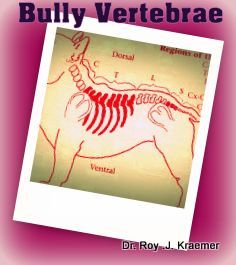 Hemivertebrae is a congenital (“at birth”, “born with”) malformation of the vertebrae seen most often in  short faced, screw tailed breeds like our bullys. Most dogs and breeds normally have from 49 to 53 vertebrae, while the screw tailed bulldog might have 10-15 fewer depending on the tail formation.  In Bulldogs those tail vertebrae that are present are usually deformed.

Normally, the vertebrae bodies differentiated into 7 Cervical, 12 or 13 Thoracic, 7 Lumbar, 3 Sacral, and the rest Coccygeal (tail) vertebrae. The large number of vertebrae predisposes the back to a high probability of incomplete development.  Hemivertebrae forms when the right and the left halves of the developing vertebral body fail to fuse, producing a body which resembles a butterfly when seen from above. The two unfused halves often grow unequally, producing a wedge-shaped vertebral body. Depending on which way the broad side of the wedge is directed, this may cause a dorsal (top) curvature (kyphosis) or a lateral (side) curvature (scoliosis). As the backbone is bent, it will start effecting the spinal cord, compressing it and/or its blood supply. If the function of the spinal cord is impaired by direct compression or by vascular problems, the animal may show either pain or loss of sensation due to the interruption of the sensory circuits; if motor nerve circuits in the cord are affected, weakness or paralysis, especially of the hind limbs, will result. Any body part receiving its nerve supply from that part of the cord posterior to the damaged area may be affected. The vertebrae most often involved are the 9th – 11th Thoracic vertebrae. Most times only a single vertebra is involved, in which no clinical problems are seen, and the malformation may be detected only accidentally, if at all. If more than one vertebra is involved, the probability of clinical problems increases due to the greater degree of curvature. In those rare cases in which the dog does show some clinical signs, the outlook is grave.

Most often, symptoms begin at the age of 3-4 months, with a sudden onset of hind limb weakness, often preceded by a gait abnormality. In pups which do show such symptoms, the hind limb paralysis generally worsens, the muscles waste, and bladder and bowel control may be lost. In those few cases, that awful decision to euthanize must eventually be faced. 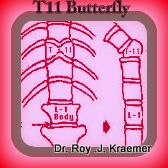 Fortunately, in most cases, any neurological abnormalities related to this condition will plateau at age 9 months when the vertebrae stop growing, thus no additional or new clinical problems are expected. Therefore if your beloved bulldog’s condition is stable by the time he or she has reached their first birthday then they are safe. 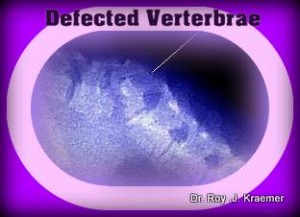 Tip: The abnormality might be only detectable radiographically. Most are incidental findings on a radiograph and are not associated with clinical signs

Tip: Due to the curvature of the last few thoracic vertebrae, secondary changes in the rib cage may be produced.

Tip: Both the wedge-shaped and butterfly-shaped types are very common in Frenchies, but when only a single one is present it very rarely causes problems.

Tip: The most common area for problematic hemivertebrae is around upper back at the 8th (out of 13) thoracic vertebrae. 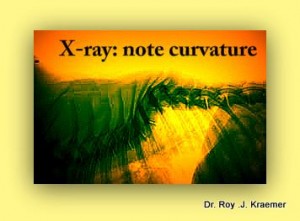 Warning: Should abnormal pressure on the spinal cord be caused the following signs can be seen:

Warning: It is important to understand that usually the presence of hemivertebrae is of NO significance and are just an interesting finding on a radiograph. If they are present in a dog with neurologic deficits, they are still likely to be incidental findings only and further testing is likely to be needed before assuming the hemivertebra is the cause. This kind of testing commonly involves special imaging (myelography, MRI, or CT imaging) to see if the spinal cord is actually compressed by the hemivertebrae.