Elongated Soft Palate in Bulldogs and French bulldogs is one of the most common upper airway conditions diagnosed in the “smooched flat face” (brachycephalic) breeds such as English bulldogs, French bulldogs, Boston terrier, and Pugs. 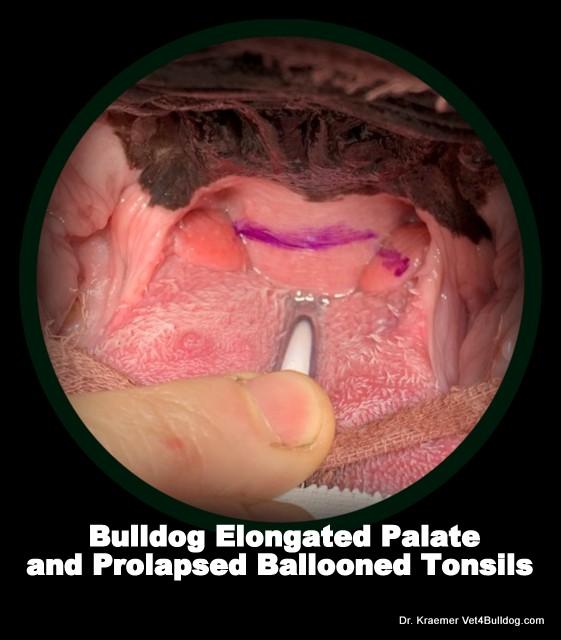 Bulldog Elongated Soft Palate is only one of a few bully upper airway anatomical abnormalities named “Brachycephalic Obstructive Airway Syndrome (BOAS), the other ones are

Your bulldog or French bulldog puppy may be affected by a combination of one or more of these abnormalities.

The  “pushed-in” compressed flat head bully confirmation has an undesirable effect on the entire anatomy of your bulldog neck &  head and its relation to the respective soft tissue and structures.

“Bubba” is a rambunctious 2y old puppy who was referred to Dr. Kraemer by his regular veterinarian after collapsing multiple times. “We had to give him mouth2mouth to bring him back” said his frantic and terribly worried owner

This video was taken during Dr. Kraemer’s post-op recheck exam. “In the first few days after his surgery I kept waking up in the middle of the night it was too quiet, i had to get up and check that he is still alive. His breathing was so quiet and relaxed, the terrible noise was gone, he now able to run around and take a walk with us, we are so happy for him, this surgery saved his life”

Bulldog elongated soft palate and the other brachycephalic obstructive airway syndrome (BOAS) abnormalities are due to their skeletal face shortening and airway compression abnormalities. Combined they adversely affect your bulldog airways by increasing airway resistance, as well as an increase of negative intra-airway pressure.

If this negative intra-airway pressure exceeds the resistance of the surrounding tissue, inflammation, swelling, and laryngeal edema will occur, which will further narrow the airways and further increase your bulldog effort required to inhale.

Your bulldog is likely to suffer from other serious medical problems due to the chronic restrictive brachycephalic airway disease,  such as: 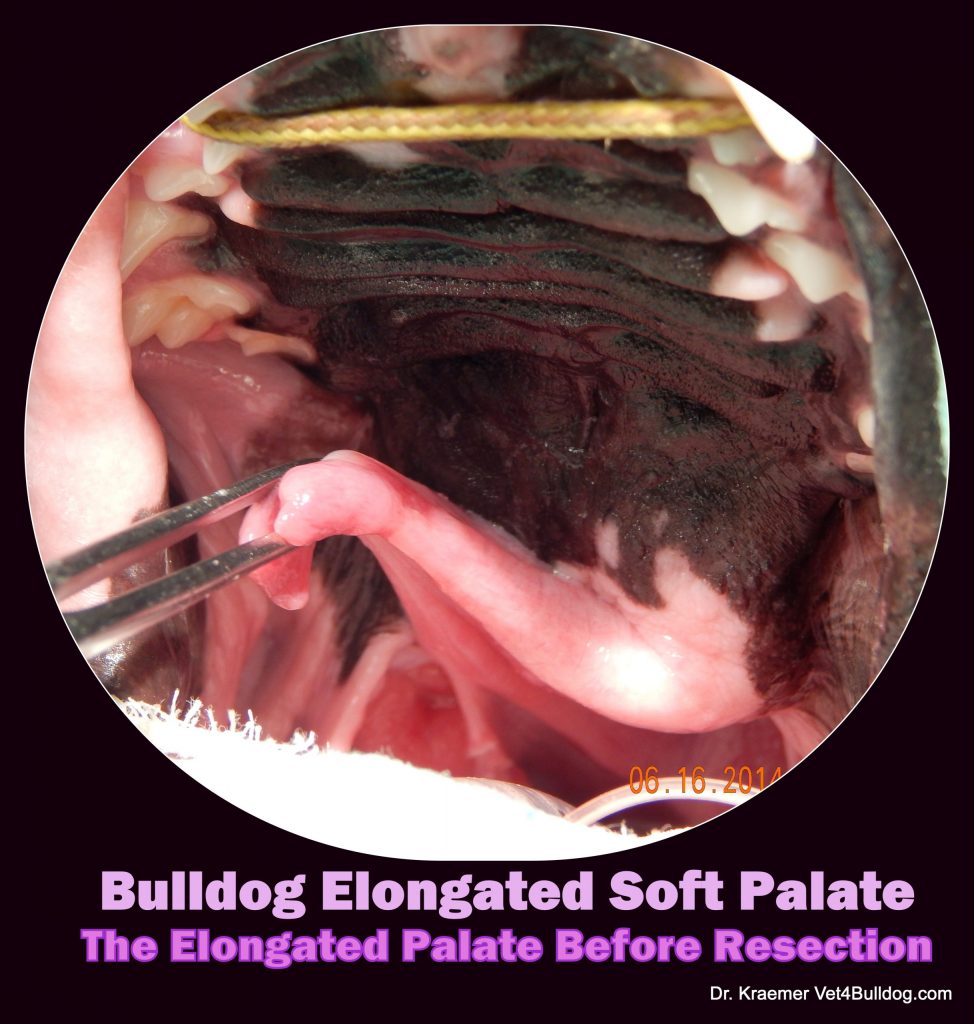 Your English bulldog and French bulldog palate is located on the roof of the mouth and has two parts:

The front (anterior) part is the “hard palate” named after the bone it is made from, it can easily be felt by opening your bulldog puppy (or yours) jaw and pressing with your finger just behind the upper incisors.

The back (posterior) part is the “soft palate” and it is located right behind the hard palate along with the roof of the mouth where bone meets soft tissue.
Sadly, for the brachiocephalic breeds like your bulldog and French bulldog, and as a direct aftermath of selective “cute smooched face” inbreeding practices, the normal anatomical boundaries of the soft palate are altered and airflow obstruction.

Dr. Kraemer performing surgery on a bulldog with an elongated palate (the halfway resected elongated part is on the rt side of the screen held by an instrument)

Stridor is a harsh “mechanical” high-pitched respiratory sound that is the hallmark of a bulldog and French bulldog’s elongated soft palate. The laryngeal restrictive passage noise is a result of the turbulent airflow that is worsened by the increase of airflow volumes such as during exercise or excitement. Stridor in bulldogs will also be exasperated by warm weather.

Stertor is not the same as Stridor. Stertor is not a laryngeal airflow restriction but rather nasal or nasopharynx obstruction. It’s a snore or snort and gasp heard during inspiration.

Elongated Palate in Bulldogs and French Bulldog initial diagnosis is usually done in the exam room, either via a vocal demonstration of the stridor noise by one of the medical team members and then have the owners confirm, or have the owners bring a video of their bulldog during excitement or strenuous exercise or often the stridor can be heard at the exam room. 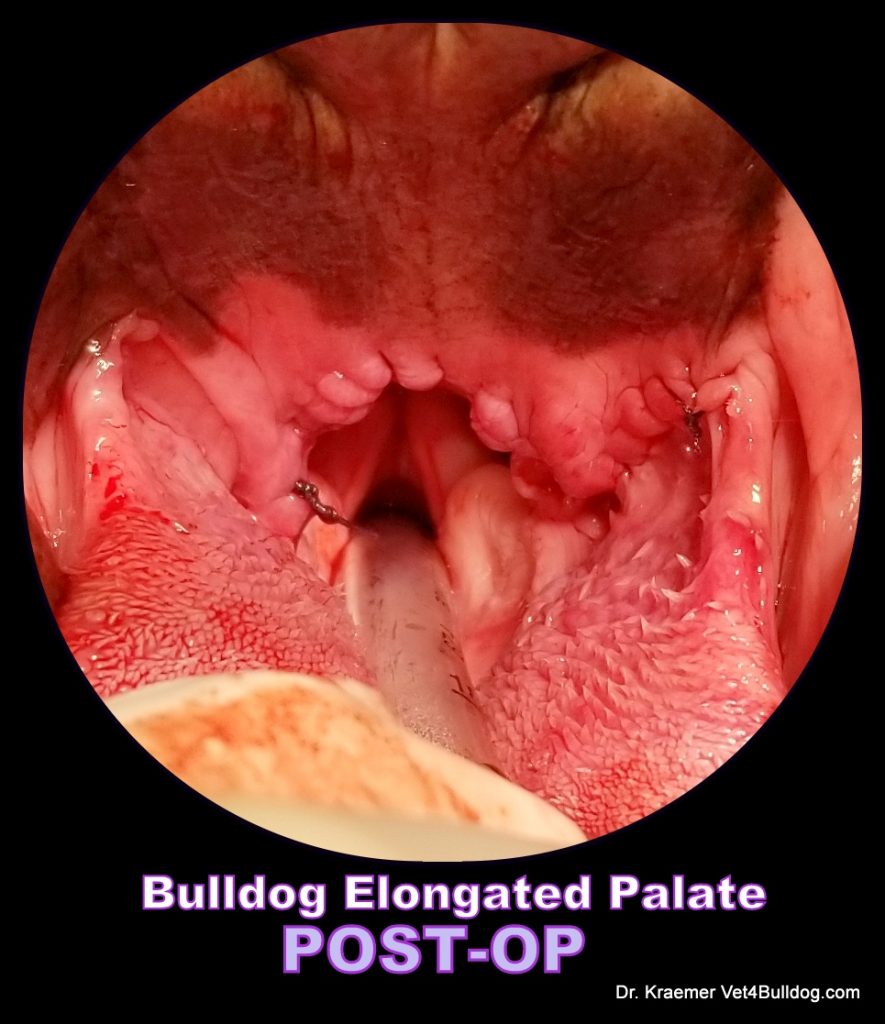 For a definitive diagnosis of an elongated palate, everted saccules and other laryngeal abnormalities direct visualization under mild sedation will be required.

IMPORTANT: It’s important to note, that medical, climate control, reduced activity, and weight management control do not and will not correct the underlying anatomical abnormalities, but merely lessen the symptoms.

IMPORTANT: It’s important to note, that medical, climate control, reduced activity, and weight management control do not and will not correct the underlying anatomical abnormalities, but merely lessen the symptoms.

Due to the seriousness and dire outcome of bulldog untreated elongated soft palate and the other brachycephalic compressive airways syndrome problems, early intervention is imperative.

SURGERY: corrective surgery is the treatment of choice whenever the anatomic abnormalities interfere with the patient’s breathing.

Since elongated soft palate always gets worse with time you must take care of it promptly, the sooner the better.  Early surgical correction of stenotic nares and elongated soft palate will significantly improve airway function and should prevent the development of everted laryngeal saccules and other secondary airflow restrictive problems.

The overall prognosis for bulldog patients depends upon

Bulldog Palate TIP #2 HARNESS:  I recommend a harness rather than a neck collar to prevent airflow restriction (for all bulldogs)

Bulldog Palate TIP #3 HYPERTHERMIA: In the event of a respiratory crisis you should check the rectal temperature: normal is between 100-1.02.5 F. If it is over 105 F, and you can’t get to a veterinary hospital, rinse your dog with cool water and place a fan over him/her till the temperature drops to 103. Don’t let it go below 100F.

Bulldog Palate TIP #4 TONGUE: The thick, large bulldog tongue often retracts inward to further compound the respiratory crisis. If your bully is in respiratory distress or collapse, make sure that he/she is sternal (i.e. laying on the sternum/chin, rather than on the side). Pull your bully’s tongue so it is stretched out and keep an eye on the color of the tongue, pink is good, purple-blue is bad.

Bulldog Palate TIP #5 TIMING: I recommend surgical repair of the elongated palate and/or stenotic nares as soon as your bully reached maturity at about 8 months of age.

Bulldog Palate TIP #6 CALM:  If you cannot afford, or have to delay surgical treatment, you can use a calm & cool environment, restricted activity, and supplements to help anxiety and inflammation like Dr. Kraemer’s V4B Bully Calm & StressLess  and V4B Bully Fish Oil Immune-Joint-Skin Chew

Bulldog Palate Tip #7 HYPOPLASTIC TRACHEA: In contrast to the common notion it is my experience that Hypoplastic Trachea appears to be tolerated well by bulldogs and French bulldogs in absence of BAS or after they are repaired.

Bulldog Palate TIP #11 SEFOFLURANE: Read Dr. Kraemer’s anesthesia warning and recommendations. We have custom pre-anesthesia bulldog protocols especially designed to minimize breed-related anesthesia risks.  Finally, all of our bulldogs and brachycephalic breed patients are placed on sevoflurane anesthesia instead of isoflurane despite the higher cost. It is always best to ensure that your veterinarian has Sevoflurane. 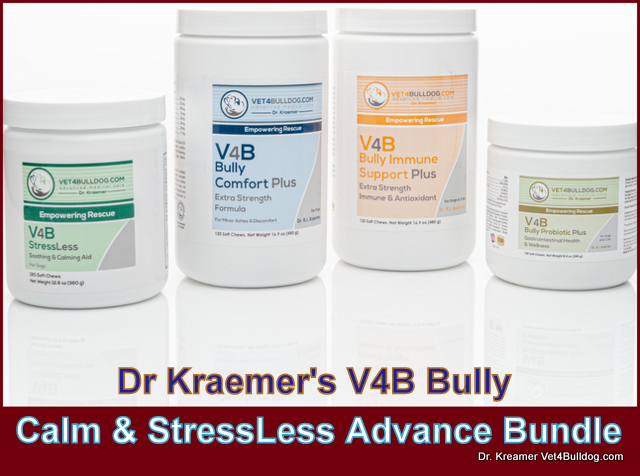 Bulldog Palate WARNING #3 TIME: Over time, as a direct outcome of years of negative intra-airway pressure (suction) bulldogs with elongated soft palate will develop other secondary problems that further obstruct airflow. Examples are enlarged tonsils, everted saccules, and hypoplastic trachea. Tragically this all can end with an irreversible, inoperable, atrophied, collapsed, larynx cartilage.

Bulldog Palate WARNING#4 PROLAPSE: In the long term, the increased effort associated with breathing can put an increased strain on the heart with heart disease and failure as possible complications. the brachycephalic syndrome is suspected to be one of the underlying causes of prolapse urethra.

Bulldog Palate WARNING#5 VEGAL TONE: Vomiting and gagging are common to the brachycephalic breeds (bulldogs) due to an increase in vagal tone, a direct outcome of the breed’s excessive upper airway pressure. This increase in vagal tone will further intensify in bulldogs with an elongated palate and other Brachiocephalic Syndrome problems (such as stenotic nares).

Bulldog Palate WARNING #6 ASPIRATION: Gagging and vomiting could lead to aspiration of the vomit content with Aspiration Pneumonia the most likely outcome.  Aspiration Pneumonia could be deadly, particularly to bulldog puppies due to their weak immune system and to any bulldogs going under anesthesia.

Bulldog Palate WARNING#7 POST OP: In the early postoperative period, swelling of the surgical sites (laryngeal edema) may occur and interfere with breathing. Thus, we closely monitor our bulldogs after extubation.

In my opinion, the post-extubation period is the most dangerous part of “bulldog anesthesia”.

At my practice, we assign a trained technician to sit next to our pet, monitor vitals, and make sure he/she is sternal with tongue stretched and pink. We also have an oxygen cage in case of an emergency.

Most times the swelling will subside within 24-48h allowing extubation and awaking of the patient.

On rare occasions, the swelling will linger and the endotracheal tube will be replaced with a temporary tracheostomy.

Bulldog Palate WARNING#8 EXPERIENCE: The surgeon performing the procedure must be experienced with the breed and the surgery. Immediate Post-op complications are more common than severe chronic cases.

There are times that the edema (laryngeal swell) prevents extubation, those patients will need to remain induced (i.e. sedated) and intubated till the swelling subsides. Transportation to overnight care should be arranged if the hospital does not provide for that.