Head Tremors in Bulldogs and French Bulldogs CAUSE:

There is more than one cause that underlines bulldog head tremors, thus you should have your bully examined for this condition.

In some bulldog head tremors cases, the thinking is that it might be a focal seizure or a stretch mechanism localized to the head.

The area of the brain affected in bulldog focal seizure head tremors is the area that controls movement.

Bulldog’s intention tremors origin is the cerebellum, the tremors are jerkier than the idiopathic bulldog head tremors.

Bulldog and French bulldog intention tremors are typically observed when your bulldog eats or drinks, or during other voluntary movements. 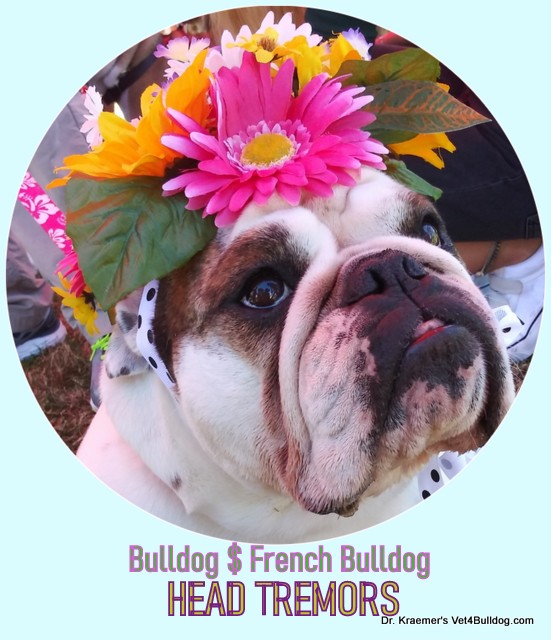 Most of the head shaking, tremors, nodding and bobbing in bulldogs and French bulldogs are short-lived, but occasionally, could last for a few minutes.

Common diagnostic testing conducted for a bulldog and French bulldog head-shaking is:

Bulldog and French bulldog head tremors are usually intermittent and are usually considered harmless, thus NO treatment is required.

Seizure medication is controversial, if your bulldog has no seizure history, I usually do not prescribe anything.

Those are often given to treat seizing bulldogs and French bulldog puppies suffering from hypoglycemia (low blood sugar) events.

Those are often given to females bulldog suffering from “postpartum calcium deficiency” (i.e. eclampsia).

Bulldog Head Tremors Tip #1 HARMLESS: Don’t panic! Bulldog head shaking (bulldog head bobbing) is not an emergency, nor a life-threatening event.  It is considered idiopathic (arising from an unknown cause) and harmless.

Bulldog Head Tremors Tip #2 DISTRACTION: Typically, I advise distressed bulldog owners to try and have their bully move his/her head and neck, distract them with a toy, or a treat.

Distraction with food, toy, “lets go play or for a walk”, or by showing the leash, will usully stop your bulldog or French bulldog head tremors.

As far as we know, bulldog and French bulldog idopathic head tremor is not a painful condition or a distress signal

Bulldog Head Tremors Tip #4 NEURO DISEASE:  We do not know of any medical and/or neurological conditions that are a direct result of bulldog head bobbing.

Bulldog Head Tremors Tip #5 GENETIC LINK: There may be a genetic link to head tremors,  head shaking, or head bobbing in bulldogs and French bulldogs.

Bulldog Head Tremors Tip #7 IMPACT: Bulldogs with idiopathic head shaking do NOT develop other neurological signs as a result of this condition.

Bulldog Head Tremors Tip #8 TREATMENT: There is NO known treatment for head bobbing in bulldogs and French bulldogs.

You can usually stop your bulldog and French bulldog’s idiopathic head from shaking by distracting him/her with food, a favorite treat or toy, a leash (“let’s go for a walk”), or having them tense their neck muscles by turning side to side.

Shaking of the extremities can happen standing up or lying down and can be progressive.

Like head shaking in bulldogs, the origin of the senior bulldog leg shaking is likely idiopathic.

The theory is that “senior bulldog leg-shaking may be associated with disk disease, neuropathy, arthritis, myelopathies, etc.

There is no known treatment for aging bulldog idiopathic leg shaking, but usually. 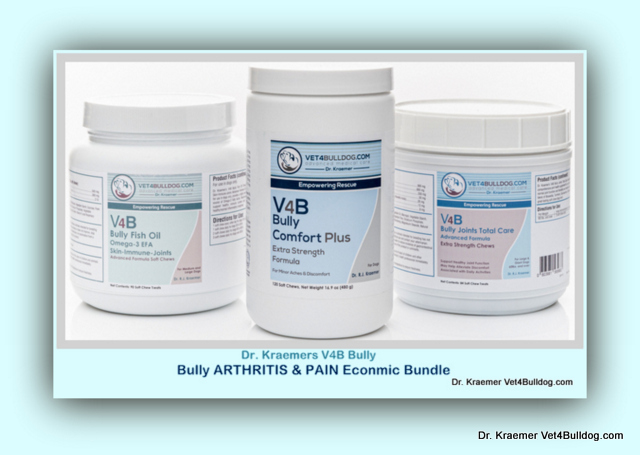 I will prescribe anti-inflammatory medication, or recommend supplements like my:

Bulldog Head Tremors warning#1 DISTEMPER VIRUS Your bulldog might be head shaking or leg shaking due to other conditions, thus you should always consult your veterinarian.

Head shaking due to advanced cases of distemper virus usually also involves the jaw and leg muscles and can be observed even while your bulldog is sleeping.

Distemper encephalomyelitis is rare because of the introduction of the vaccine and its integration to our canine pet’s wellness core vaccine series.

Bulldog Head Tremors warning#2 POISONS & TOXINS: Other types of tremors can be due to poisons and toxins, hormonal abnormalities, and electrolyte imbalance.