English bulldogs and French bulldogs MPLis common and is often diagnosed when they are only a few months old.

The patella, or the “bulldog kneecap”, as you might know, it, is a small, sesamoid bone that is buried in the tendon of the quadriceps muscles (thigh) of your bulldog’s knee joint. The patella is attached to the top front of the tibia bone, just below the knee.

The patella, together with its tendon and the quadriceps muscles, form the “extensor mechanism” and are normally well-aligned with each other.  Your English bulldog,

American bulldog, and French bulldog puppy’s patella are normally situated inside a groove,  it naturally glides in that groove up and down when in motion.

Your bulldog patella groove should be deep enough for the patella to fit into it comfortably.

When your bulldog puppy’s tendons, muscles, and bones are properly aligned, the result is a stable knee joint.

When these structures are improperly aligned, the major muscles of the thigh pull towards the inside (medial) aspect of the leg, applying abnormal stress to the knee joint. These forces pull the patella out of place and toward the inside of the leg.

As your bulldog puppy patella pops in and out of place, the normal gliding motion within the joint is interrupted. As a result, the knee cartilage of your bulldog puppy becomes degraded and the bone-on-bone movement leads to arthritis and Degenerative Joint Disease (DJD).

Bulldog MPL is a multi-factorial condition. What we typically find in bulldog patella luxation is a:

MPL SHALLOW GROOVE: a trochlear groove that is too shallow

WEAK PATELLAR LIGAMENT: a weakened and stretched lateral patellar ligament, which is likely a result of the shallow groove.

LOWER ATTACHMENT: the third problem occurs when the lower attachment of the kneecap ligament is too far from the inner side of the shinbone or tibia. This, I believe, is due to your bulldog and French bulldog’s exceptionally short legs relative to their body. It is also possible for this lower point of attachment to shift inward – throwing off the entire joint alignment.

Medial Patella Luxation in Bulldogs and French Bulldogs CAUSE:

Bulldog MPL is mostly a developmental orthopedic problem, thus it is usually diagnosed at an early age.

Trauma is less common and can happen at any age.

Primarily bulldog patellar luxation is diagnosed during the orthopedic exam with the help of knee palpation. 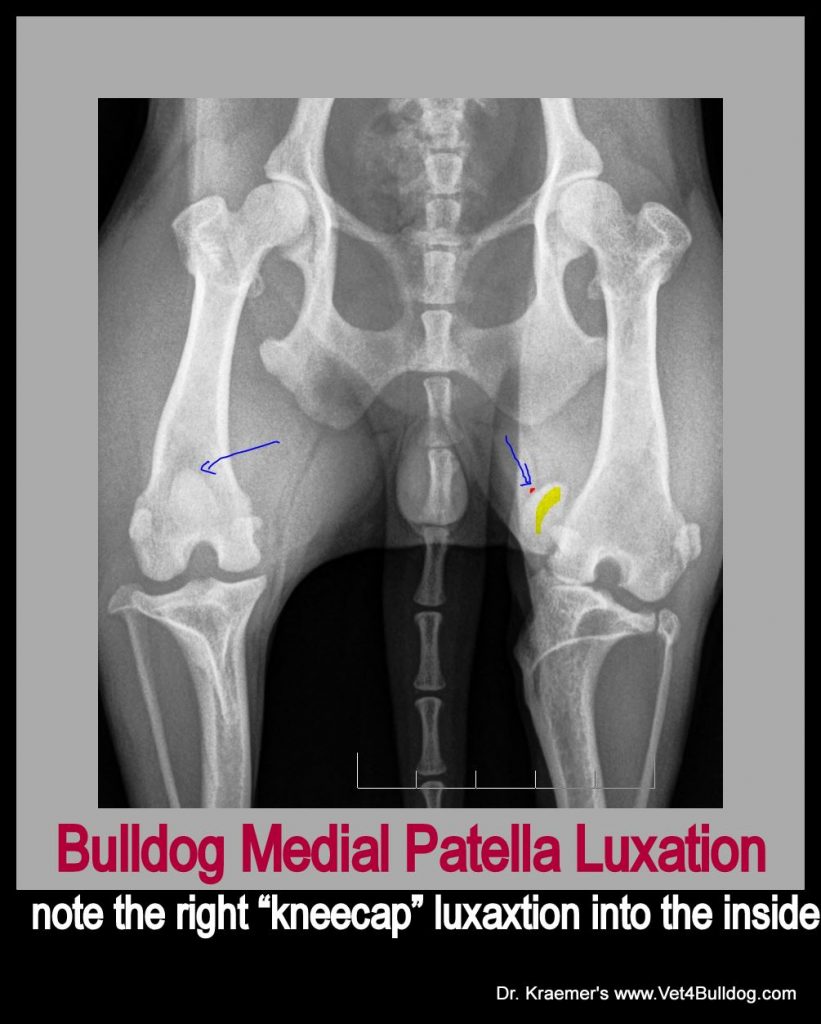 The  “pop”  heard, felt or sensed during the knee palpation is associated with the luxating kneecap.

IMAGING: radiographs are usually taken to help evaluate the knees and hips 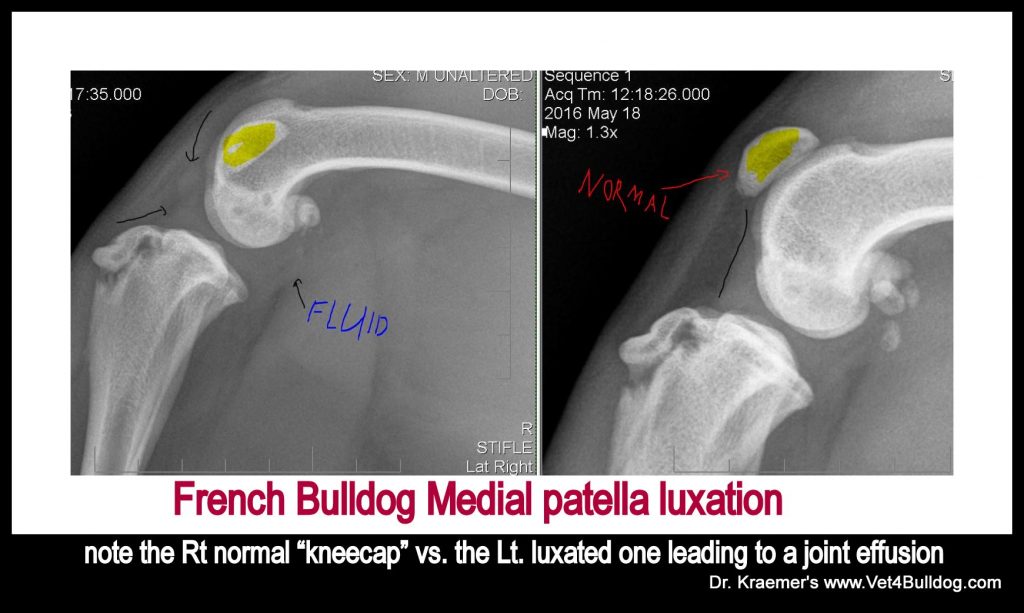 The severity of medial patella luxation in bulldogs and French bulldogs (MPL) has been graded on a scale of one to four, based on an orthopedic examination

Your bulldog puppy’s patella can be manually luxated when the leg is extended and the patella is pushed over but will go back into place when released.

Your bulldog puppy’s patella sits loosely in its normal position but will luxate medially when the leg is flexed.  The reduction is possible with manipulation, a “hopping” gait is generally noted in this case.

Your bulldog puppy’s patella is displaced medially (to the inside) most of the time but can be reduced manually when the leg is extended.

Your bulldog puppy’s patella is displaced medially all of the time and cannot be manually reduced.  A hunched-over stance is often noted, and some dogs may even appear bowlegged.

Surgery is recomended for most bulldog MPL Grade 2 and above.

Keeping your bulldog and French bulldog puppy lean and trim will help prevent these problems from getting worse.

These supplements contain natural anti-inflammatories and comfort that can help heal and repair injured joints and can be used long-term, as well as help to minimize the need for prescription drugs and their potential adverse effects. 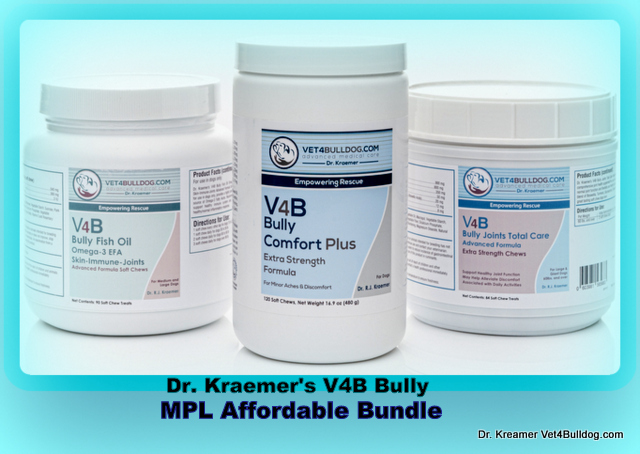 Surgery is recommended for Grade 2 MPLs or worse, preferably as early as a few months of age.

The course of action that needs to be taken depends on the knee’s structure and how abnormal they are, no two cases are exactly alike.

There are three surgical procedures that are used to treat patellar luxation. One, or several, of the following strategies, may be required to correct your bulldog puppy’s patella luxation:

MPL RECONSTRUCTION: reconstruction of soft tissues surrounding your bulldog’s knee cap to loosen the side toward which the patella is riding and tighten the opposite side.

MPL DEEPENING: deepening of the femoral groove so that your bulldog’s kneecap can seat deeply in its normal position.

MPL TRANSPOSING: transposing the tibial crest, the bony prominence onto which the tendon of the patella attaches below the knee. The tibial crest is moved in the opposite direction of the luxation and reattached to the bone with a pin. This will help realign your bulldog’s quadriceps, patella, and tendon.

Bulldog MPL Tip #2 SURGERY: In order for the patella not to jump out of its track, the groove (trochlear) must be made deep enough to accommodate and cradle the patella as it moves up and down in the groove. 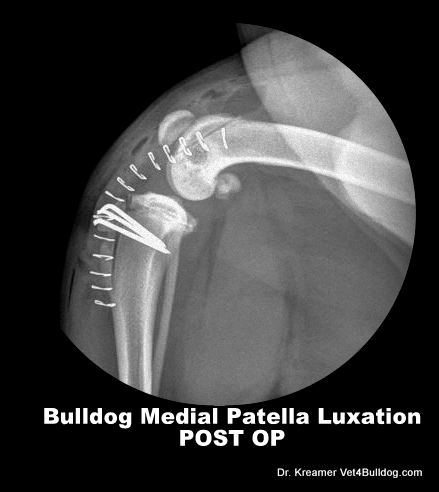 Bulldog MPL Tip #3 CONGENITAL: bulldogs with MPL are either born with that condition (congenital), or have a developmental misalignment of the extensor mechanism. This is caused by a group of abnormalities that includes your bulldog puppy’s entire hind limb that together affect the contour of the bones as your puppy grows.

Bulldog MPL Tip #4 BOWLEG:  Many bulldogs and French bulldog puppies have a “bow-legged” wide stance, which results in the muscles of their thighs pulling their patella to the inside of their knees. Often, this extra inner load is further aggravated due to forces generated by dysplastic hips, a condition common to the breed (bulldog and French bulldog hip dysplasia). This abnormality is aggravated when the tibial crest, which is the point where the quadriceps tendon attaches to the lower limb, is internally rotated and the trochlear groove is shallower than normal.

Bulldog MPL Tip #5 HIP PROBLEMS: The problem in bulldog and French bulldog puppies might start from the hip with coxa vara and decreased anteversion of the femoral head and neck. In other words, there is a decreased angle of inclination between the femoral longitudinal axis and the femoral neck, combined with a lesser caudal to the cranial angle of the femoral neck. This skeletal abnormality in the growing bulldog puppy displaces the extensor muscles of the hind limb, chiefly, the quadriceps group. This muscular displacement has an effect on the distal femoral physis (growth plate) resulting in impaired growth of the medial side and accelerated growth of the lateral side of the distal extremity of the femur.

The net effect is medial bowing and rotation of the distal extremity femur and the proximal extremity of your bulldog puppy’s tibia. The patella is simply pulled along with all the other bony and soft tissue structures. Further compounding the problem is the fact that a chronically luxated patella does not exert pressure in the trochlear groove, which is crucial in producing a groove of sufficient width and depth in the growing bully.

Bulldog MPL Tip #6 LAMENESS: Clinical signs associated with patella luxation vary greatly with the severity of the disease. It might start as just a brief limp for a few steps and, as the disease progresses in duration and severity, this lameness becomes more frequent.

Bulldog MPL Tip #7 TRAUMA: On very rare occasions, patellar problems are the result of direct or strain injuries to the kneecap or accidental trauma to the knee joint that tears the collateral ligaments that keep the patella moving in line.

Bulldog MPL Tip #8 RADOPGRAPHS: Most times, the diagnosis of bulldog patella luxation is based on palpation during an orthopedic examination. Nevertheless, radiographs of the pelvis, knee and tibias are always recommended.

MPL in Bulldogs Warning #1 PAIN-FREE:  Once arthritic changes have developed, surgery is much less likely to produce a pain-free leg.

MPL in Bulldogs Warning #2 MEDIAL & BILATERAL: The luxation is medial (inward) in most cases and often both knees are affected.

MPL in Bulldogs Warning #3 ARTHRITIS: Every time the kneecap rides out of its groove, cartilage, which is the lining of bones within joints, is damaged, leading to osteoarthritis and pain.

MPL in Bulldogs Warning #4 FEMORAL GROOVE: It is our experience that left alone, the abnormal alignment of the patella may also aggravate the shallowness of the femoral groove and lead to deformation of the leg.

MPL in Bulldogs Warning #5 ACL TEAR: The abnormal position of the kneecap destabilizes the knee, increasing weight load on the inner part of the knee, thus, it predisposes your bulldog to a rupture of his cranial cruciate ligament (ACL Tear), at which point they typically stop using the limb.

MPL in Bulldogs Warning #6 BREEDING: We know that bulldogs and French bulldogs who have this problem tend to pass it on to their puppies, therefore, it is not recommended to breed those dogs.