Milder forms of your bulldog food allergy could present with just frequent rumbling and gas release (yes that kind of gas, the one everyone turns his/her nose away from). Other times your bulldog might also suffer from diarrhea, vomiting, and abdominal pain.

In some cases, food allergies could progress to more serious digestive medical conditions such as bulldog and French bulldog IBD (Inflammatory Bowel Disease) 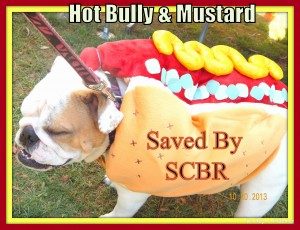 Food Allergies in Bulldogs and French bulldogs that lead to a digestive problem can be treated with a hypoallergenic elimination prescription diet. It can be either a novel protein diet of a single source such as Kangaroo, or a hydrolyzed protein diet with a single low allergen carbohydrate source. The protein source should be predominantly from an animal meat source but there are also vegetarian options.

A minimum of 2 weeks trial with a hypoallergenic prescirption diet is advised.

CHALLENGE TEST: If by the end of the trial period your bulldog or French bulldog digestive problems are greatly improved I recommend that you reintroduce your previous diet as a diagnostic challenge (i.e. “challenge test”). If your bulldog’s previous indigestion clinical problems re-emerge then you could be highly confident your bulldog has a food allergy.

Food Allergies in Bulldogs and French Bulldogs MYTH vs. FACT

GRAIN FREE FACT: in fact, bulldog food allergy is usually due to the protein source found in meat. The most common allergens are chicken (60%), then beef and fish. Also, on the frequent food allergens shortlist are corn, soy, wheat, and dairy. To read more about The Myth of Grain-Free Diets and Bulldogs and French Bulldog (“Non-Grain Diets”, “Low-Grain Diets”)….Click Here

TIP #1 “ITCH”: food allergy should be on top of your rule-out list if your bulldog is suffering from year-round itching and/or otitis (i.e. ear infections) in addition to a GI problem.

TIP #2 TRIAL: The best way to diagnose bulldog and French bulldog food allergy is a minimum 2-3 week food trial on a strict prescription hypoallergenic diet of either a novel protein diet or a hydrolyzed protein prescription diet.

TIP #3 “NOVEL”: If you chose a trial with a prescription novel protein diet instead of a hydrolyzed one then I prefer either rabbit or kangaroo  (i.e. avoid, relatives of chicken like duck and turkey as well as venison, bison, fish, salmon they all have been mixed into common commercial diets and will cross-react, thus not suitable for the trial.)

TIP #4 “OBJECTIVE”: Remember, the objective of the hypoallergenic diet trial is to avoid the offensive allergen while providing the necessary dietary essentials (i.e. calories and nutrients).

TIP#5 “$$$”:  if the RX hypoallergenic diets are too expensive, you can try one of the OTC diets that are not based on any of the common allergen (soy, corn, chicken, dairy, beef, wheat, fish).

TIP #6 “DURATION”: If your bulldog is showing no improvement after 2-3 weeks on a strict RX hypoallergenic food trial, you can extend the trial a few extra weeks or try a different one. Remember not all bulldogs are the same, one might respond well to one type and poorly to the other one while the next bulldog puppy may have the opposite result.

TIP #7 “TREATS”: For those of you who can’t survive the trial duration without giving your bully treats, don’t despair. Most prescription hypoallergenic diets offer hypoallergenic treats. Those diets are also available in cans which could be used to give Rx “meatball-pill-pocket” treats.

TIP #8 “GRAIN-FREE”: If you have a food allergy concern and you believe your bulldog or French bulldog puppies allergies are due to grains, then your grain-free dietary trial should last at least 2-3 weeks (8-10 weeks for bully skin allergic dermatitis due to food allergy).

TIP #9 “GRAIN”: Grain should count for less than one-third (<1/3) of your bulldog diet, the other 2/3 should be in the form of meat-animal-protein, fruit, and vegetables.

WARNING#1 “DIETS MIXED w/ SUPPLEMENTS”: Don’t select your bulldog and French bulldog diet based on the advertised and often hyped label ” extra supplements ” boosting. Supplements that are mixed into formulated diets are not likely to harm your bully but it’s really more of a marketing and pricing ploy than real value. The most popular and supplements advertised on bully diets are fish oil (omega 3 and 6), glucosamine, chondroitin, MSM, and probiotics (the exception  would  be  rx-diats) 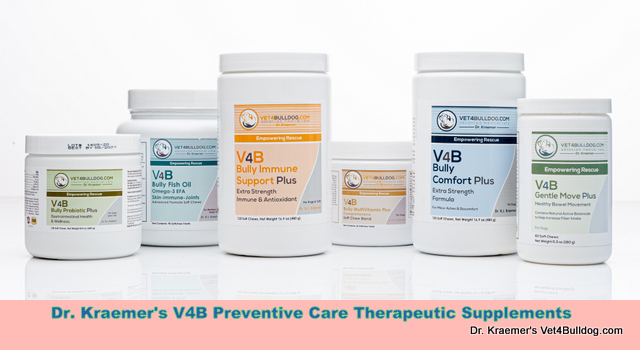 As a rule, there are not enough of the supplument in pure bioavailable dosage to therapeutically impact a medical condition in those diets daily feeding recommendations.

Therefor when medically indicated I recommend that supplements are to be given separately as a standalone treatment. To learn more “CLICK HERE”

WARNING #3 “BLOOD TEST”: While blood testing for bulldogs and French bulldog itch atopic allergic dermatitis can be a helpful diagnostic tool, the same cannot be said for food allergies. The best and preferred diagnostic test for food allergy is a minimum of 2-3  weeks hypoallergenic prescription diet trial (in contrast, food allergy trials for bulldog Skin allergy should last 8-10 weeks).

WARNING#6 “FOOD TESTING”: Don’t start the trial until you have completed a comprehensive workup and resolved other ongoing medical issues such as a thyroid problem or/and other common gastrointestinal diseases (i.e. parasitic, viral, bacteria, etc).

WARNING#7 “LOW-GRADE DIETS”: Lower-grade pet diets have a higher risk for unwanted adverse effects such as immune-mediated disease (like IBD)due to the higher possibility of unwholesome elements and contaminants.

WARNING #8 “CONTAMINANTS”: Sometimes bulldogs and French bulldog’s food allergies are due to an undetected contaminant within that grain and meat.

*This guide was compiled courtesy of Dr. Kraemer, a “must read” manual for any current or future bully owner