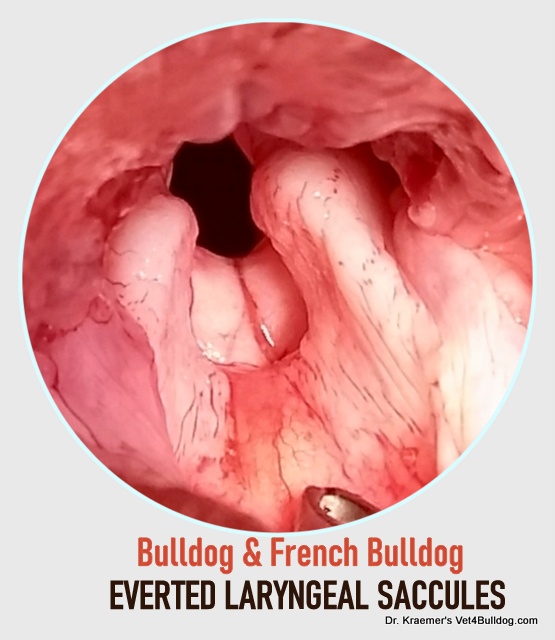 Many bulldog owners are apprehensive and alerted by their bulldog’s noisy respiration and intolerance to any excitement, exercise, and activities. They wonder about the mysterious everted laryngeal saccules condition as it relates to their bully airway problem and enquires about treatment options for their suffering bully.

In addition, many don’t know the saccule’s anatomical location, why, and how they might impair breathing and affect their bulldog’s general health.

They are considered secondary outcomes to some of the better-known BOAS such as:

The bulldog saccules are located inside your bulldog throat near the base of the tongue one on each side of the larynx. They are below the tonsil near the vocal cords.

Your bulldog laryngeal saccules are part of the normal laryngeal mucosa and in their normal flat deflated state are not visible and do not obstruct airflow. When the saccules evert, they become visible at the bottom part of the larynx.

Depending on the severity and chronicity they can appear as small bubbles in the early less severe state or much bigger bulging tissue as they balloon and become more pronounced and obstructive.

Everted Laryngeal Saccules in Bulldog and French Bulldog CAUSE:

When a bulldog or a French bulldog suffers from any of the main airway abnormalities associated with BOAS, such as

The odd for BULLDOG OVERRATED LARYNGEAL SACCULES  will dramatically increase

All those BOAS conditions contribute to an increase in your bulldog’s respiratory effort and compound the obstructive airway and restricted laryngeal airflow problems. They lead to abnormal negative pressure and suction forces like the ones seen when excessive suction is applied to a straw. The laryngeal mucosal lining will react to those forces the same way as your straw does, it will bulge inward and continue to balloon as the suction increases.

The ballooned tissue occupies space that is essential for airflow, in so compounding the existing BOAS respiratory efforts.

Hacking,  gaging, regurgitating, and vomiting due to high vasovagal tone

Due to the high parasympathetic tone and oxygen depravation

If or when bulldog aspiration pneumonia is suspected

Surgical removal of the bulging saccules is usually required for severe cases.

Bulldog everted laryngeal saccules are typically removed when or after the elongated palate, stenotic nares, and prolapsed tonsils are operated on.

Bulldog Everted Saccules Tip #1 EXAM: A thorough oropharyngeal examination with a laryngoscope and proper illumination must be conducted.

The saccules exam must be done under proper sedation or general anesthesia.

Bulldog Everted Saccules Tip #3 EXCITEMENT & ACTIVITY: should be minimal, any sudden increase in respiratory effort can lead to serious repercussions.

Bulldog Everted Saccules Tip #4 LEASH: don’t use anything restrictive or irritating on your bulldog and French bulldog neck. Avoid neck leash, a harness is preferred.

Bulldog Everted Saccules Tip #5 HEAT & HUMIDITY: keep your bulldog cool and relaxed, avoid the outdoors during the hot and humid hours. Bulldogs suffering from everted laryngeal saccules tend to overheat and are prone to heat strokes.

Bulldog Everted Saccules Warning #1 OTHER OBSTRUCTIONS: in addition to bulldog laryngeal everted saccules and the other common brachycephalic obstructive airway syndrome conditions, you must rule out other laryngeal obstructions that are not directly related to BOAS but can imitate them.

Bulldog Everted Saccules Warning #2 DELAY: delaying correction of bulldog laryngeal everted saccules and the other bulldog obstructive airway conditions can lead to complications that might require temporary or permanent tracheostomy.

Bulldog Everted Saccules Warning #3 MONITORING: close monitoring and supplementary oxygen are required during post-op recovery, most of the complications and emergencies happen during the recovery phase.

Bulldog Everted Saccules Warning #4 LARYNGEAL COLLAPSE: neglected and untreated bulldog BOAS such as bulldog everted laryngeal saccules could lead to fatigue of the laryngeal apparatus, atrophy of its cartilages, and its irreversible collapse.