I am concerned about my 18-week old puppy loose joints. In these videos, you can see that his rear legs look loose and wobbly. We have put rugs down since he arrived, but our floors are slippery and I wonder if sliding around on them while he was 10 and 11 weeks old created problems.

I also wonder if our play was too vigorous for him; we have suspended those games and any walks (which were not lengthy but did involve a somewhat steep incline).

Can you tell me what you see — is there a problem here?

We live on the island of Madeira, Portugal. At this point, I think our puppy is too heavy to travel under an airplane seat, and he cannot travel in cargo… So unless we charter him a flight, or fly a surgeon here, we are limited in remediation efforts.

Thank you for your help.

1 Answers
0 Vote Up Vote Down

Answer for English Bulldog Puppy Wobbly Loose Joints. Dear Michele, I am sorry to hear about your English bulldog puppy’s loose joints and wobbly walk, the beautiful island of Madeira must be a great life for him

The first video you sent me goes by too fast but there is a noticeable limp (lameness). From that video, I suspect a front leg(s) problem in addition to what you described as a hind leg “loose joint”.

When your bulldog puppy was born his bones and joints are incomplete, they are mostly soft cartilage that yet to mineralize/ossify.  The bones have a growth plate that remains open providing for the growth and lengthening during the puppy maturation process. The bone plates will fuse at around one year of age. Therefore during that growth phase, English bulldog puppies or French bulldog puppies “loose joints” are not uncommon.

Bulldog puppy wobbliness is often associated with neurological problems, most common of which are various forms of bulldog and French bulldog vertebral malformation such as spinal Bifida, hemivertebra, etc.

Limping is usually a manifestation of pain, this is usually considered an orthopedic problem. In contrast to limping, dragging, wobbling, or/and misplacing the legs is often associated with nerve damage

Though hip dysplasia is common to bulldogs it usually will not be associated with pain, nevertheless, hip dysplasia and hip luxation can present as “loose joints” and wobbliness.

Bulldog and French bulldog medial patella luxation are very common; they can present early in life as a mild degree (grade 1-2) but also a more severe degree (grade 3 and even 4). The mild degree is often is subclinical and the sesamoid bone luxation could be viewed by the owners as a “loose joint” or wobbliness.

A more severe case of bulldog puppy MPL can be painful, leading to a noticeable limp.

Bulldog and French bulldog anterior cruciate ligament injury, tears, and raptures can present in various forms of abnormal gate or walk depending on severity and degree of pain.

You should see a veterinarian for a full physical, lameness assessment, neurological soundness, pain analysis, range of motion, palpation, etc.

X-rays are critical, many of the wobbly loose joint bulldog conditions described above can be diagnosed with simple radiographs.

A  gate analysis that can provide empirical data of your bulldog puppy weight-bearing of each of the puppy’s four limbs (see video).

Keep your bulldog lean, obesity can exasperate both orthopedics and neurological conditions 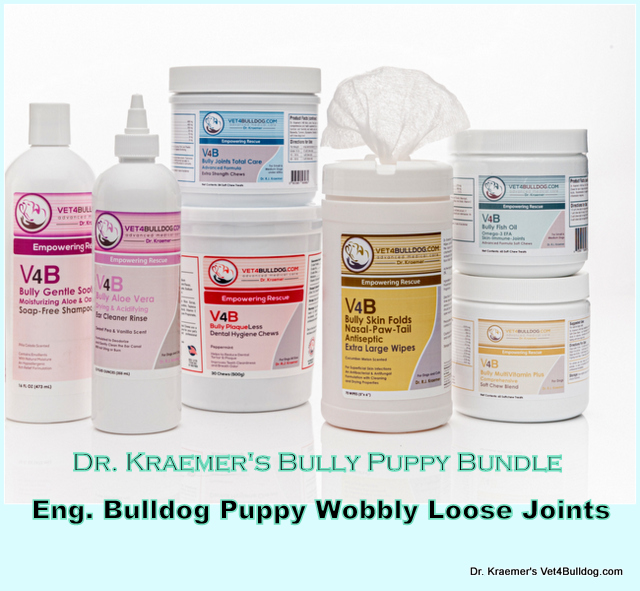 You could try a short course of doggy non-steroidal anti-inflammatory (“doggy aspirin”), if the symptoms dramatically improved then the puppy condition is likely associated with inflammation and pain

I have treated and therapeutically implemented stem cell therapy for various bulldog orthopedic and neurological conditions, for more information please read the respective pages on my website.

You are welcome to send me more videos, diagnostic imaging, lab tests, and Dr. notes
Best of luck
Dr. Kraemer

*This guide was compiled courtesy of Dr. Kraemer, a “MUST READ” manual for any current or future bully owner

Please login or Register to submit your answer

Disclaimer
Important: This site has been setup purely for non-commercial use. All images are copyrighted to their respective owners.
Connect with Us
important information
French Bulldogs English Bulldogs
Address
Refund Policy
Privacy Policy
Terms and Conditions
*Free Shipping On Orders Over $150 Within The USA*
Contact Info
Dr. Kraemer Vet4Bulldog
434 S Tustin St B,
Orange, CA 92866
Phone: 949 899 6642
Email: Contact Us
Check out Vet4Bulldog on Yelp
Copyright © 2018 Dr. Kraemer Vet4Bulldog - All rights reserved. | Sitemap | All content on this website is the property of Vet4Bulldog unless otherwise noted absolutely no content can be copied or reused in any way on other websites.
Ask Dr. K / Q & A Request an Appointment Email Us
French bulldog fractured teeth
Bulldog Head Tremors