Corneal Ulcer in Bulldogs and French Bulldogs is very common, it is concidered the #1 eye problem in bulldogs. It is diagnosed in every  phase of the aging process, more often in mature adults and senior bulldogs but also in bulldog puppies.

While trauma is the main cause of corneal ulcers in most breeds, it is NOT so in bulldogs

Due to their squashed skull, excessive skin folds, bulgy eyes, tear production deficiencies, and eyelid problems, the brachycephalic breeds such as the English bulldogs and French bulldog chances of suffering from corneal ulcers are much HIGHER than in most other dog breeds. 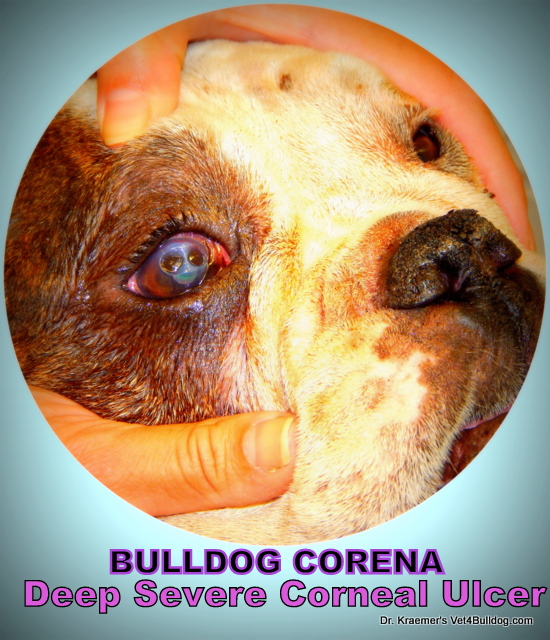 Bulldog and French bulldog cornea transparency allow light to enter the eye and travel through the inner eye chambers and lens. The cornea allows the light to travel to the back of the eye where the retina and optic nerve are situated and where the light is translated into an image.

Any reduction of corneal transparency will impede the light’s ability to reach the nerves placed in the back of the eye, thus immediately affecting your bulldog eyesight.

The bulldog cornea is made from three specialized layers

The bulldog cornea is bathed and “lubricated” with tears, the tears film helps provide nutrients and oxygen to the cornea.

The bulldog epithelial corneal ulcer is the most common type, the least serious, and usually the one that heals quickly with proper treatment

A Bulldog Stromal Corneal Ulcer is deeper and easier to see, its usually cloudy looking

bulldog Descemtocele ulcer is the deepest one and the most serious, without urgent care it could perforate and your bulldog could lose its sight permanently

Corneal Ulcer in Bulldogs and French Bulldogs CAUSE

For most breeds, trauma is the #1 cause, NOT SO FOR BULLDOGS

In contrast to other breeds, the most common causes of bulldog corneal ulcers are:

Inward inversion of the eyelids due to the breed of excess facial skinfold, the lid and eyelashes rub, irritate and injures the corneal

Bulldog KCS is an Immune-mediated condition common in the breed that affects tear production. Lack of tear will void the corneal from essential nutrients, oxygen, and lubrication which brings on chronic corneal disease and ulceration.

Abnormal eyelash growth such as distichiasis, trichiasis, and ectopic cilia that encounter and rub the cornea cause repeated injury.

Due to their flat squashed skull, their eyes bulge out and the eyelid fails to completely close leading to abnormal corneal exposure and tear film problems.

Pain typically is manifested by:

Bulldog and French bulldog corneal ulcers can be very painful

Evidence of underlying traumatic causes such as abnormal eyelids

Looking for evidence of ocular disease such as glaucoma and uveitis including ocular discoloration & bulging consistent. The diagnosis will require tonometry (measurement of the intraocular pressure)

Using a special corneal stain and ultraviolet light we can detect ulcers that might be difficult to deduct on an exam. 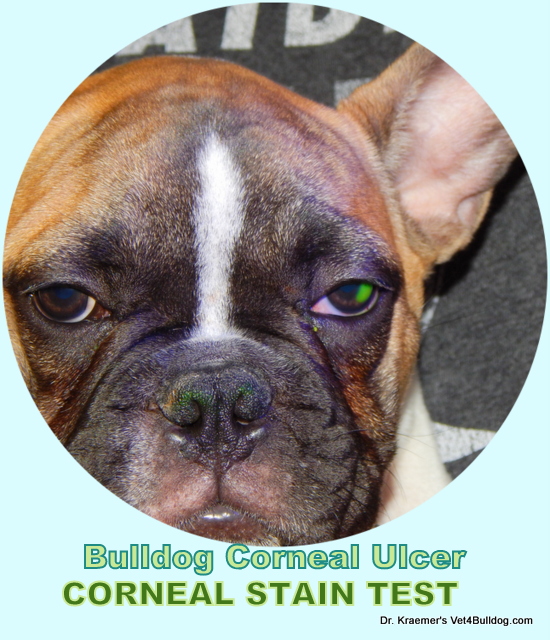 A deep more advanced corneal ulcer or non-healing one will require a sample for culture and cytology.

Treatment depends on the type of ulcer and the underlining cause

It is important to recognize the cause & effect of itch and painful nasal or facial bulldog skinfold dermatitis and bulldog corneal ulcers. The proximity of the infected folds to the eyes means that an itch, pawing, rubbing of the infected skinfold can lead to an accidentally injured cornea

ENTROPION SURGERY: is urgently needed when the corneal ulcer is caused by your bulldog’s inward eyelid rotation

TEMPORARY ENTROPION SURGERY: for bulldogs suffering from rotating eyelids (entropion) due to spasmatic pain or as an emergency relief till permanent entropion can be scheduled. This procedure can be done in an emergency set up in seconds and without anesthesia (or if needed mild sedation)

ABNORMAL EYELASH SURGERY: to help remove an eyelash(s) that are growing in the wrong direction or inside the eyelid. It is usually done with liquid nitrogen freezing (cryo freezing)

Bulldog ulcer wanring#1 ATROPINE: in addition to relaxing the spasm the atropine ophthalmic drops will also dilate your bulldog pupils, thus you need to keep your bulldog away from bright light.
Bulldog ulcer warning #2 STEROID: Ophthalmic topical steroids are often used for various ocular conditions. It should only be used after the ulcer healed, it should NEVER be used on a live active corneal ulcer since it inhibits healing and could cause serious complications.

If your bulldog seems worse (squinting, blinking, discolored cornea, etc.) after applying  any topical ophthalmic that contains a steroid (look for words like “pred”, “dex”, “hydro”) immediately discontinue and see your vet as soon as possible

Bulldog ulcer warning #3 EMERGENCY: Corneal ulcers are an emergency, any time your bulldog is squinting or the cornea seems discolored, vascular or opaque see a veterinarian right away.