Urinary incontinence in Bulldogs and French Bulldog, is not due to a single medical problem but rather a manifistation of a wide range of medical condtions.

Urinary incontinence in Bulldogs and French Bulldog CAUSE:

The cause of USMI is not definitive but is thought to be caused by weakness of the urethral muscle and a decrease in circulating estrogen thus it is more common in spayed females than intact females or males.

Whenever possible treatment for urinary incontinence should be determined by the underlying cause. 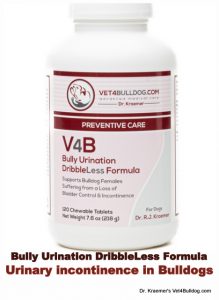 Tip #1 ECTOPIC URETER: Bulldog and French bulldog puppies who are incontinent and nonresponsive to house training should be evaluated for congenital abnormalities such as ectopic ureter (ureters bypassing the bladder sphincter.)

Warning #1 INAPPROPRIATE URINATION: do not confuse bulldog urinary incontinent with bulldog inappropriate urination due to behavioral issues such as domination, territorial, anxiety, etc.
Warning #2 PU/PD: it’s important to distinguish between incontinence and simply inability to hold urination due to excessive drinking. Bulldogs who are PU/PD (excessive drinking/excessive urine) usually have water-like urine and pee large volumes. Their urine is diluted, might have sugar in it or high proteins. Blood work and urine analysis should be able to help differentiate between the two conditions
Warning #4 STRAIN: Straining to urinate is usually due to pain and discomfort. Common reasons are Cystitis, Urinary stones, Prostate disease. The urine might be cloudy and discolored often with frank blood. Urine analysis, urine culture, radiographs, digital rectal exam, and ultrasound are the diagnostic tests recommended in order to rule out those conditions.

Warning # 5 HYPERTENSION: PPA should not be used on bulldogs with high blood pressure (hypertension). your bulldog should have its blood pressure taken before starting treatment(baseline) and then again 1 month after starting the PPA.
Warning # PYOMETRA & ANEMIA: DES can cause pyometra in intact females and anemia due to bone marrow suppressant. Your bulldog should be monitored with frequent blood count tests.