The reduced sunlight exposure affects your bulldog hair follicles, thus slowing or stopping their hair growth. This seasonal effect is thought to be influenced by melatonin and prolactin hormone production, which may also be associated with follicular hormone receptors localized in your bulldog’s flank area.

Bulldog flank non-itchy hair lost is not common to the young, the condition is usually seen as your bulldog matures during adulthood and mid-age.

Often the patterns present on both flanks with similar appearances.

Not every bulldog flank baldness case is seasonal or cyclical. Some bulldogs will stay bald indefinitely, regardless of the season, light exposure, and/or supplements. Some bulldogs may only have partial regrowth.

In most cases, bulldog flank alopecia is diagnosed based on:

In contrast to bulldog allergies and bulldog pyoderma, bulldog flank alopecia is usually NOT ITCHY.

Bulldog flank alopecia is usually considered a harmless cosmetic skin condition and is not generally associated with a medical problem. Therefore, usually therapeutic action is not required 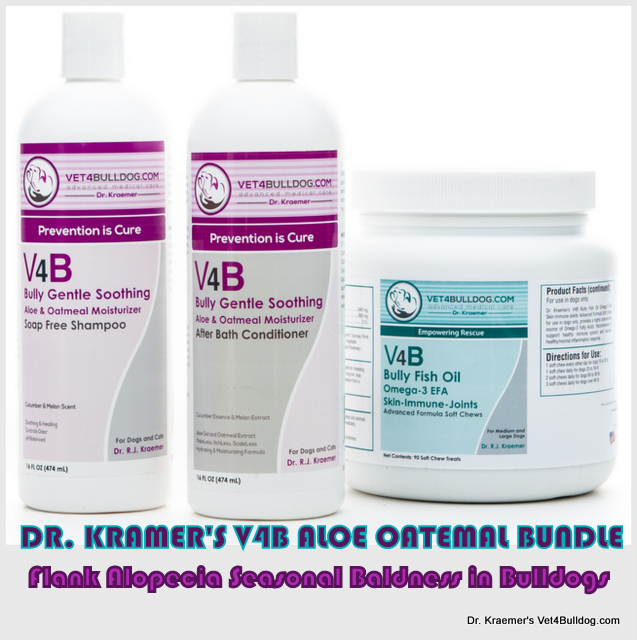 Exposure to sun and light can often reverse the condition, hair will grow back, and often the skin discoloration will also resolve

If you are compelled to do something, you can try a melatonin supplement.

Bulldog Flank Alopecia Tip #1 MELATONIN: Melatonin is a hormone that affects photoperiodic functions and can sometimes be effective in preventing bulldog seasonal baldness.

Oral melatonin is safe and inexpensive; 6 mg twice daily is advised for an average-sized bulldog, usually until the hair grows back.

There are other common causes of seasonal and non-seasonal hair baldness and darkening of the skin in bulldogs that might include the flanks. Thus, you should not assume that they are all “bulldog and French bulldog flank seasonal baldness”. It’s best that you consult your veterinarian in those cases.

Examples would be skin conditions such as:

Skin scraping, cytology, and cultures can help with the definitive diagnosis when needed.

Regardless of the underlying reason for baldness and darkening of your bulldog flanks, it is worthwhile and safe to initiate a topical skincare treatment and administer skin supplements until you are able to see your veterinarian and establish a definitive diagnosis.

“An Ounce of PREVENTIVES is Worth a Pound of CURE”


Empowering Rescue
Join Our Pledge
Connect with Us
Search Vet4Bulldog.com
[/vc_row
Disclaimer
Important: This site has been setup purely for non-commercial use. All images are copyrighted to their respective owners.
Connect with Us
important information
French Bulldogs English Bulldogs
Address
Refund Policy
Privacy Policy
Terms and Conditions
*Free Shipping On Orders Over $150 Within The USA*
Contact Info
Dr. Kraemer Vet4Bulldog
434 S Tustin St B,
Orange, CA 92866
Phone: 949 899 6642
Email: Contact Us
Check out Vet4Bulldog on Yelp
Copyright © 2018 Dr. Kraemer Vet4Bulldog - All rights reserved. | Sitemap | All content on this website is the property of Vet4Bulldog unless otherwise noted absolutely no content can be copied or reused in any way on other websites.
Ask Dr. K / Q & A Request an Appointment Email Us