Tail pocket dermatitis in bulldogs and French bulldog is caused by a malformation of the bulldog vertebral tail bones. The twisted, ingrown, corkscrew, bully tail can present in many varieties, shapes, and forms, each with a different degree of severity, and a different degree of discomfort and pain intensity.

In contrast to most other breeds, your bulldog and French bulldog tail bones will often turn around backward and on occasion twist like a pretzel, dragging with it the skin and hair.

The bulldog tail, in many of those cases, is deeply embedded and tucked-in, hidden, with only parts of it visually showing.

The odds for a painless life are different for every bulldog tail pocket. 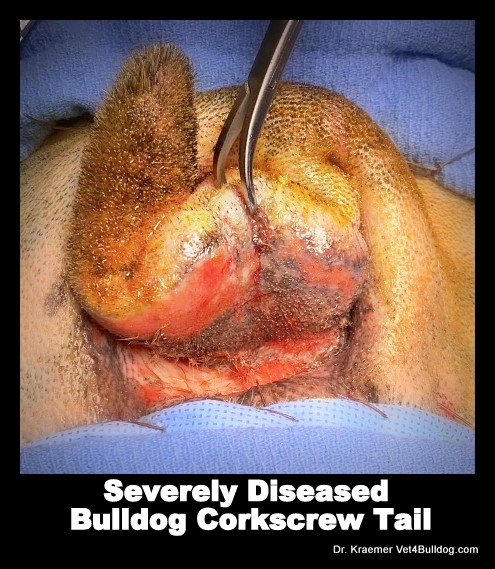 Other Bulldog vertebral malformations are:

Most times, the selection is for the cute flat face (Brachycephalic), folded precious skin, and charming corkscrew tail. 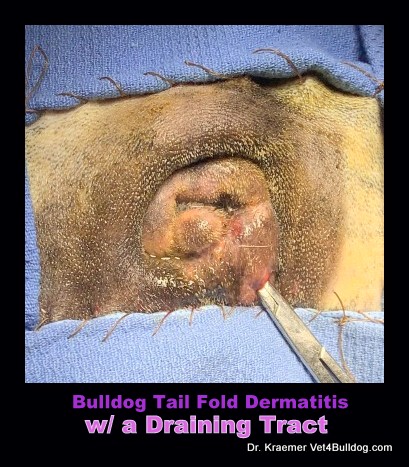 Like the tail, the apposed nasal skin and friction lead to excessive moisture that is compounded by tears and mucus from the eye. Itching of the area can lead to injury to the eye and acute corneal ulcers.

Like the tail, the apposed skin and friction lead to excessive moisture compounded by urine and other vaginal secretions that can also ascend to the urinary tract leading to chronic bulldog UTI

Like the tail the apposed skin and friction lead to excessive moisture that is compounded by licking, bulldog paw allergic dermatitis, and bulldog interdigital cysts.

“Bulldog Acne” is often compounded by constant wetness due to drooling and water bowl chin dripping.

The degree of the tail problem and the therapeutic urgency might not be obvious to the new bulldog owner.

It is critical that a digital exam (best done with gloves and a wipe) is done since most of the inflamed, ulcerative, and infected areas are deeply embedded, and not necessarily in plain sight. For the best outcome, your bulldog tail folds should be maintained with antiseptic wipes

Wiping once daily is usually adequate.

“Bulldog Maintenance” is the centerpiece of this site,  “An Ounce of Prevention Is Worth a Pound Of Cure” is Dr. Kraemer’s mission statement.

Most bulldog tail folds can be managed and cared for by a wipe like the V4B Extra Large Bully Antiseptic Skin Fold Wipe. 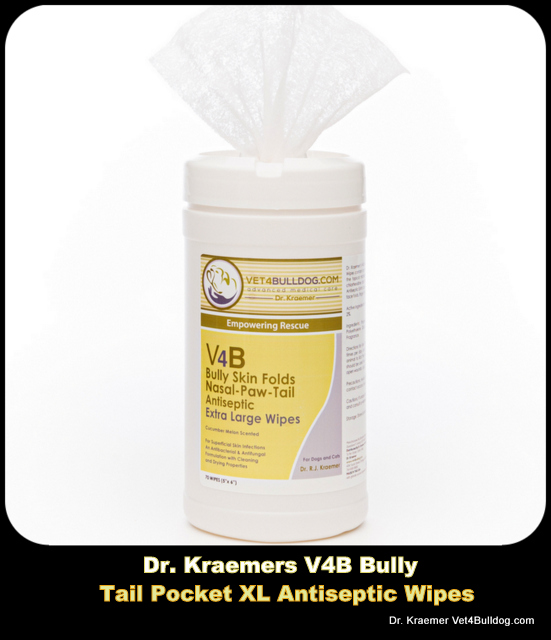 For the more severe bully skinfold infection cases, prescription medication should be discussed with your veterinarian including topical anti-inflammatory-antiseptic powder, or ointment.

In an acute case, pain medication, anti-inflammatory itch control, antibiotics, and antifungals might be required.

In the event that the therapeutic preventive measures and medical treatment are inadequate, then tail removal should be discussed.

Make sure that the surgeon has done bulldog tail amputation many times and has a high success rate.

The bulldog corkscrew tail bones are above the descending colon, a cut to deep can severe the intestinal wall.

QUALITY OF LIFE : for bulldogs suffering from chronic, painful, ulcerative, bleeding, difficult to manage tails, and/or those with draining tracts, surgery is your best quality of life method of choice

LOOKS:cosmetically, the end result is great. I never had a bulldog owner complain, and your bulldog will love you for that. You can take that to the bank. 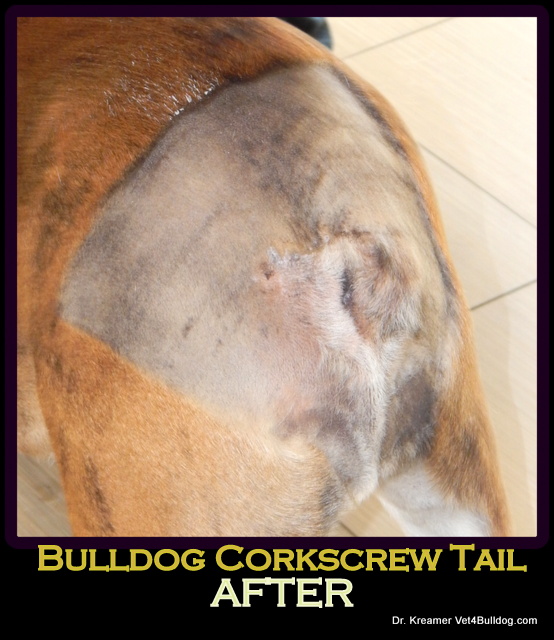 Bulldogs Tail Pocket TIP 1 DEEP WIPE: The tail is often tight and deep, thus the most critical parts are often missed by the hesitant owner. Make sure to go all the way under, deep in the tail pocket and tail folds. Most of the “action” (infections) are in those hidden parts.

Tail Pocket in Bulldogs TIP 2 PERINEAL IRRITATION: Other reasons for your bulldog to be irritated in his/her backend are:

But for bully tail fold dermatitis, by far my V4B Antiseptic Bully Skin Fold XL Wipes are the most popular. 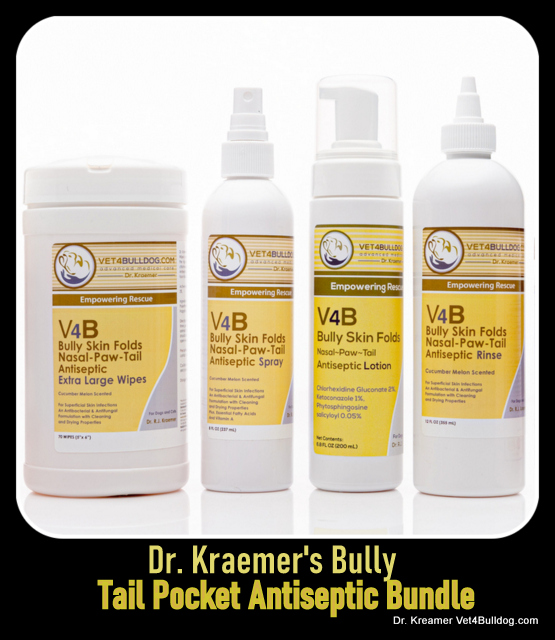 Extra Large bully wipes, will cover your entire hand/fingers protecting you from the “stinky stuff”.

The XL wipes are large, durable surfaces that can do the job well, even in a very folded, protected tail.

Tail Infection in Bulldogs Warning # 1 VAGINAL: Do not use a wipe to clean the vaginal area after using it on the tail.

Tail Infection in Bulldogs Warning # 3 VET: For bulldog tail removal surgery, I recommend seeking a veterinarian experienced with the procedure.

Systemic medication should be used only for rare acute events, and only short-term. They are harmful to your dog and ineffective for long-term management.