Allergic Atopic Itch Dermatitis in Bulldogs and French Bulldogs is one of the most common allergies seen in bulldogs.

Other less common bulldogs and French bulldog skin conditions are:

Allergic Atopic Itch Dermatitis in Bulldogs and French Bulldogs CAUSE:

Allergic atopic itch dermatitis in the English bulldog, French bulldog, and American Bulldog is due to environmental exposure to various allergens such as: ITCHING is the whole mark of bulldog & French bulldog allergies

HOW OFTEN:1-2/week with a medicated shampoo
HOW LONG:10 min. lathering before rinsing
CREAM RINSE CONDITIONER: recommend after shampooing

HOW OFTEN:1-2/week with a medicated shampoo
HOW LONG:10 min. lathering before rinsing
CREAM RINSE CONDITIONER: recommend after shampooing

The waterless gel application is best used on non-bath days, shake and then apply it to hands or direct, finish by rubbing into the skin and coat.

For optimal outcome use a conditioner after shampoo. We offer them as bundles at a reduced cost.

BULLDOG ALLERGY STEM CELL THERAPY & CRYOBANKING: For bulldogs who cannot take anti-itch medication like prednisone (steroid) due to adverse effects, or for pet owners who wish not to use those drugs due to their long-term potential harm, you can talk to your veterinarian about an alternative replacement.

Cytopoint is a new, long-lasting, non-steroidal, monoclonal antibody that targets IL-31, and is a safe itch relief injection that I now offer my bulldog and French bulldog patients with allergic itch atopic dermatitis. It is usually administered every 4-8 weeks, or as needed.

Any bulldog and/or French bulldog with an intense itch should be ruled out for allergic atopic itch dermatitis. Intense itch often leads to self-trauma, thus is stressful and can lead to sleepless, restless nights, and is often painful at an advanced stage.

Bulldog allergies Tip #3 IMMUNE THERAPY: Bulldogs and French bulldogs presenting with itchy skin due to environmental allergic atopic itch dermatitis might benefit from a blood test that shows the specific allergen they are allergic to. After the allergens are identified, an immune therapy can be initiated.

You should realize that it could take months before your bulldog’s itching improves. Success might require lifelong continuous treatment. Also, bulldog owners committed to immunotherapy should know that there are no guarantees that the itch relief will be 100%, meaning you will need to continue some degree of topical and systemic medication.

Bulldog allergies Tip#5 CONTACT ALLERGY: If your bulldog presents with itching after a topical product was applied, bully contact allergy is the most likely cause.

Bulldog allergies Tip #7 ANTI HISTAMINES: OTC antihistamines can be used for allergic itch atopic dermatitis in bulldogs and French bulldogs, but their therapeutic effect is questionable. On the other hand, they are relatively harmless and could help sedate your pet, thus giving one before bedtime might provide a good night’s rest for both owner and pet.

Bulldog allergy Tip #8 GENETIC: We believe that in bulldogs there is a genetic disposition to atopic itchy allergic dermatitis.

Bulldog allergy Tip #10 STEM CELL THERAPY: For bulldog and French bulldog puppy owners who prefer avoiding systemic allergy medication like prednisone (steroid) due to their adverse effects, or for pet owners who prefer not to use these drugs due to their long term potential harm, I now offer a harmless, cutting-edge, new therapy. This new-age treatment for chronic allergic atopic itch dermatitis is called Stem Cell Therapy, and it is an anti-itch modality that uses your pet’s own repair and anti-inflammatory cells (stem cells) to heal and treat his or her allergies

Bulldog allergyTip #11 BATHING: Most environmental allergens are absorbed through the skin, thus just a water rinse alone helps remove the allergen, as well as, scales and dander.

Bulldog allergy Tip #13 DUST MITES: To reduce the effect of an indoor allergen like dust mites, you should dust your house frequently and use synthetic materials for your bulldog’s bedding. Also, vacuum and wash bedding often, change air conditioner filters frequently, and keep humidity in the house < 50%.

Bulldog galleries Tip#14 MOLD: To avoid indoor allergen like molds, you can use air purifiers, and dehumidifiers, and avoid household plants and mulch.

Bulldog allergy Tip #15 TOPICAL TREATMENT: Topical skin treatment is critical and should always be part of your therapeutic strategy and planning. They should usually include anti-itch and hypoallergenic shampoo and lotion,.  Remember, among the benefits of topical therapy is the mechanical removal of allergens from your bulldog and French bulldog’s skin and coat.

Bulldog allergy Tip#16 FOOD ALLERGY: Itchy bulldog and French bulldog puppies that are also suffering from concurrent gastrointestinal problems should be suspected of a food allergy. 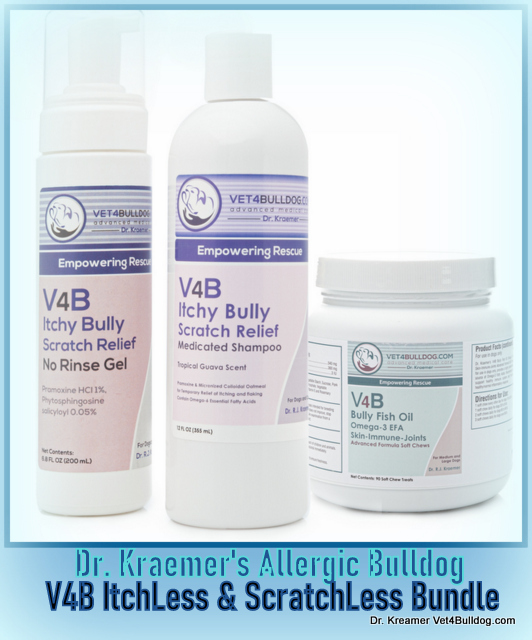 Food allergies are more common in young bulldog puppies, they are non-seasonal and may not respond to itching medication, like prednisone, the same way puppies with itch due to atopic dermatitis do.

Bulldog allergy Warning #2 DEMODEX MITE: Bulldogs with skin allergies suspected of atopic dermatitis should also be tested for skin mites (Demodex and sarcoptic mange).  Additionally, in the event they have not responded well to the prescribed allergy treatment, they should also be tested for ringworm (DTM fungi culture) and get a biopsy for histopathology to rule out immune-mediated, keratinization defects and cancer.

Last, a blood test should be performed to rule out hormonal abnormalities like hypothyroidism and hyper-adrenal issues.

Bulldog allergy Warning #3 HYPERSENSITIVITY: Don’t confuse hypersensitivity with atopic allergy dermatitis. Hypersensitivity disorders are usually due to vaccine reactions or insect bites and will present with acute onset and swelling often of the face, lips, and paws.

Bulldog allergies Warning #4 STEROID:  Relieving the itch with a steroid might be effective, but long-term use is likely to be damaging with the potential to cause multiple adverse effects.

Bulldog allergies Warning #5 MRSP: We have been seeing a rise in bacteria that are resistant to common antibiotics (MRSP). If your bulldog is not responsive to the empirical antibiotic prescribed, a culture should be done.

Bulldog allergy Warning #6 DURATION: Allergic atopic itch dermatitis in bulldogs is often a long-term condition that can last for the life of your pet and usually requires treatment over an extended period of time.