Bulldog Juvenile Demodex is self-limited and of short duration.

The most common skin presentation of a bulldog puppy with localized demodicosis is a non-itchy patch of lost hair.

In contrast to the puppy localized bulldog demodicosis, the bulldog red mite “generalized”  form, also known as bulldog “adult demodicosis,” is usually the result of an underlying immune-compromised disease. These bulldogs are typically immune suppressed due to an underlying medical condition such as

Clinical presentation of the adult generalized bulldog demodicosis is often severe, diffuse dermatitis with secondary bacterial and yeast infection. In contrast to the puppy form,  the treatment for this form usually requires prescription medication in addition to the supplements and medicated therapeutic topicals.

Demodicosis red mite skin disease in bulldogs is diagnosed by the clinical presentation and a positive microscopic finding from a skin sample that was acquired from the patient. 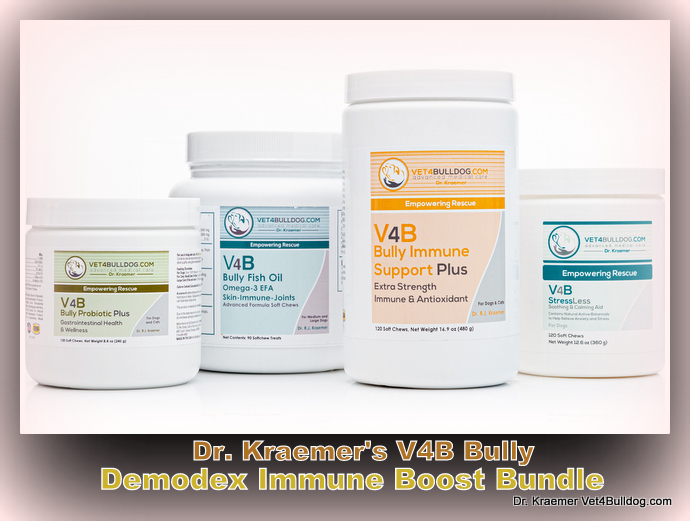 I also advise for a:

IVERMECTIN: An estimated duration of a 3-month daily dose of oral Ivermectin to help eliminate the red demodex mites.

ANTIBIOTICS: At times, a course of anti-microbials to treat secondary skin infections.

MEDICATED SHAMPOO & GEL: A weekly, or biweekly, bath with a hair follicle flushing and antiseptic/fungal medicated shampoo like my:

In 30 years of practice, I have seen in non-bulldog breeds only a handful of cases of generalized adult demodicosis. In contrast, while in comparison, I diagnose and treat a few bulldogs and French bulldog puppies each week with skin disease due to demodex red mites.  While some of those bulldogs are stressed, abused, malnourished rescue cases, many others are well cared for, privately-owned bulldogs.

I believe that there is a genetic predisposition of bulldogs to contract these mites.

Tip #1 NON-CONTAGIOUS:  The bulldog Demodex canis red mites are NOT considered to be contagious to your other pets or family members. dedication

Tip #2 GENETICS:  The bulldog demodectic red mite juvenile-onset and the generalized form of demodicosis are much more common in bulldogs than in most other dog breeds. We believe that there is a genetically inherent predisposition.

Tip #3 LAB TESTS:  If your bulldog was diagnosed with general adult demodicosis, you should consider running some general diagnostic tests in order to rule out an underlying immune suppressant disease like hypothyroidism, hyper-adrenal disease, chronic parasitic infestation, etc.

Tip #4 STEROIDS: If your bulldog was diagnosed with demodicosis, the medical records should be reviewed to determine if any immune suppressant drugs, like steroids (cortisone), have been used recently.

Tip#5 R/C SCRAPING:  Your bulldog puppy should have additional scrapings examined in order to monitor the response to therapy every few weeks.

Tip #7  SUPPLEMENTS: Even after your bulldog is clinically improved and taken off the ivermectin, I usually recommend continuing immune booster supplements like Dr. Kraemer’s Bully V4B Immune Support and V4B Bully fish oil EFA Chews for a few additional months.

Tip #8 BRAVECTO: There are a few flea control preventatives, like Bravecto, that have shown some ability to also control the red mite. I always start demodicosis cases on those flea control medications and continue using them year-round, even after the condition has been resolved.

Tip #9 IVERMECTIN: To avoid adverse effects when treating with ivermectin, I always start at the lowest dosage. If your bulldog has shown no adverse effects, I will incrementally increase the dosage every 7 days.

Tip #10 ITCH: Most bulldogs with juvenile puppy demodicosis are not itchy, at least not early on. They typically present with only a focal or multifocal baldness, sometimes with additional scaling and redness.

Warning #1 RELAPSE: Due to the underlying disease associated with the generalized form of bulldog demodicosis, relapses after discontinuation of the treatment are not uncommon, this therapy might be necessary for an extended period.

Warning  #2 STEROIDS: Because demodicosis red mite skin disease is due to an immune system that is compromised, you should avoid treating your bulldog with any immune suppressant drugs. The most common mistakes I see in my practice are bulldogs whose symptoms were misdiagnosed as “allergic dermatitis” and injected or prescribed steroids (cortisones) for itch control.

Warning  #3 GENETICS: If your adult female or male bulldog was diagnosed with demodicosis skin mites, you should consider neutering or spaying them since we believe that there is a genetically inherited predisposition to the disease. 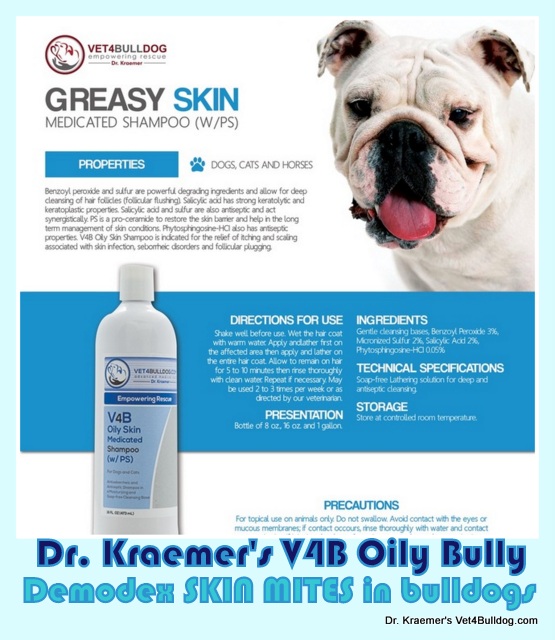 Warning  #4 IVERMECTIN: The use of ivermectin is forbidden in some breeds like collies, shelties, and Australian shepherds due to high-risk, life-threatening, adverse effects. In bulldogs, adverse effects are rare and limited in their severity when usage is stopped in a timely manner.

Warning  #5 SIDE EFFECTS: You should be familiar with the adverse effects of ivermectin. Even though they are rare, when observed they most often manifest as nausea, wobbliness, stumbling, tiredness, and lethargy. I have seen a case of temporary blindness. All of the above adverse effects are reversed once the ivermectin therapy is stopped. I have never seen a long-lasting side effect due to treatment with ivermectin.

Warning #6 DURATION: In a severe case, such as the generalized adult demodicosis form, I recommend continuing the medications for a minimum of three months. Owner compliance is critical in order to avoid relapse and drug resistance.

Warning #7 INFECTION: Remember, besides the eradication of the mites, it is vital to address the secondary bacterial skin infections and ensure that no concurrent diseases exist that could impair your bulldog’s ability to respond to treatment.

” An Ounce of PREVENTION Is Worth a Pound of CURE”

*This guide was compiled courtesy of Dr. Kraemer, a “MUST READ” manual for any current or future bully owner.